Performance-based Vauxhall Insignia GSi was first shown at Frankfurt, and is available to buy in showrooms from March 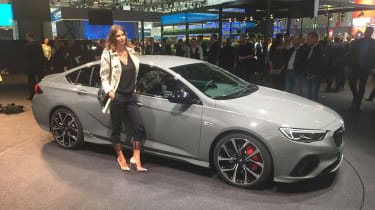 Vauxhall has announced pricing for its Insignia GSi, which starts at £33,375. The new performance model was first launched in September at the Frankfurt Motor Show.

For the base price of £33,375, you get the Grand Sport saloon variant of the Insignia GSi, which comes with a choice of 2.0-litre four-cylinder engines: a turbocharged petrol or a twin-turbo diesel. The petrol version produces 257bhp and 400Nm of torque, while the diesel churns out 207bhp.

Power is put down through a four-wheel-drive system, which features torque vectoring on the rear axle. This is able to accelerate each rear wheel individually to boost traction when cornering. 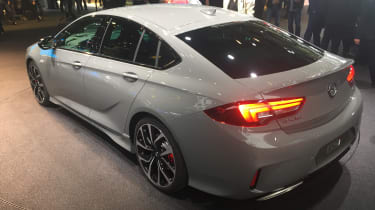 The performance-based Insignia has been developed at the Nürburgring race track in Germany, where it became the fastest Vauxhall in history. In October, an Insignia GSi lapped the ‘Green Hell’ 12 seconds quicker than the more powerful previous-generation Insignia VXR.

To mark it out from the rest of the range, the GSi features a subtle bodykit with silver accents on the front bumper, twin exhaust pipes and optional 20-inch alloy wheels wrapped in sticky Michelin Pilot Sport 4 S tyres.

What do you make of the Vauxhall Insignia GSi? Let us know in the comments!