Mansory reveals its line-up of modified monsters at Geneva 2018 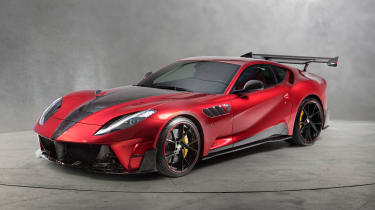 German tuning firm Mansory can always be relied upon to bring something special to the Geneva Motor Show. And in 2018 it didn't disappoint, with eight modified models on display. This year, Mansory has turned to Aston Martin, Bentley, Bugatti, Ferrari, McLaren, Mercedes, Porsche and Rolls-Royce for its subject matter, and as you would expect, all eight cars get unique treatment at the hands of its staff. 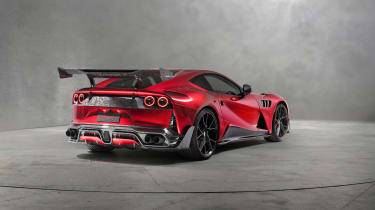 Not only does Mansory go to town on the cars themselves, it also sees fit to give them unique names. And this year, the line-up kicks off with the Mansory Stallone. A name like that conjures up visions of an unstoppable super-SUV, but it's actually a highly modified Ferrari 812 Superfast. It's caked in carbon fibre, with plenty of the material visible on the outside and interior, too. There's a huge rear wing that gives the Superfast a passing look similar to the Aston Martin Vulcan, while Mansory also adds 21 and 22-inch wheels front and rear, a bespoke steering wheel and lashings of leather inside. In addition, it has tuned the naturally aspirated V12 to produce 819bhp, because the standard car's 789bhp clearly isn't enough. 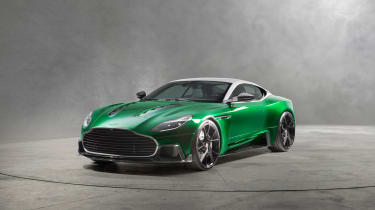 Next up is the Mansory Cyrus. This uses the Aston Martin DB11 as its base, but Mansory has added a green and silver paint job, lowered the suspension by 35mm, fitted an even larger wraparound grille and front spoiler that's designed to reduce front end lift, a redesigned bonnet, a carbon fibre rear wing and rear diffuser. There's 22-inch forged aluminum alloy wheels, too. Inside, there's silver leather and Alcantara trim, plus more carbon fibre. Under the skin, the DB11's 5.2-litre twin-turbo V12 motor has been tweaked to make 691bhp, which lowers the 0-62mph time to 3.6 seconds and raises the top speed to 205mph. 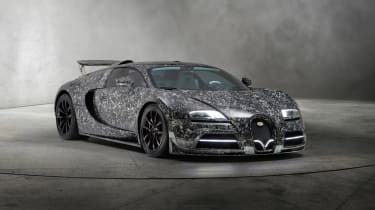 The Mansory Bugatti Veyron Vivere Diamond Edition by Moti gets unique carbon fibre bodywork with a marble effect finish to the top surface. In addition, a revised grille and air intakes with LED strip lighting has been added, while more LED lights are fitted further back, including over the engine. Inside, there's lots of white leather and more marblled carbon fibre trim. 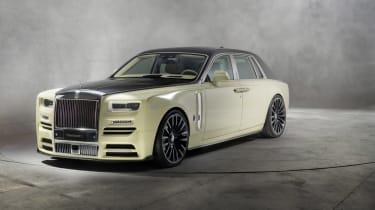 If a Rolls-Royce Phantom isn't unique enough, then Mansory offers the Bushukan Edition of the luxury car. It gets a unique yellow and black two-tone paint job, colossal 24-inch wheels and modified bodywork to make it look even more imposing. Again, the V12 engine has been tweaked to make 602bhp and 950Nm of torque. 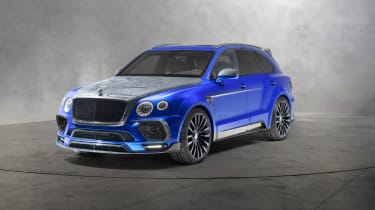 Mix a luxury SUV and the colour blue, and you get the Mansory Bentley Bentayga Bleurion Edition. On the outside, everything bar the 24-inch wheels and some carbon fibre finished trim is a vivid electric blue, while the only respite inside is in the back seats, which are white. Power for the W12 engine has been raised to 740bhp, while torque is a tree-felling 1,080Nm. 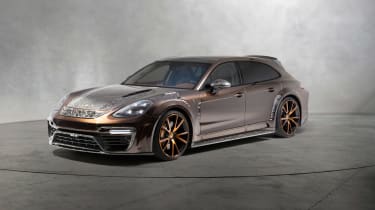 There are plenty of modified Porsche Panamera Sport Turismos around, and Mansory has a range of updates for the grand tourer. There's a widebody modification, 22-inch wheels, new front and rear spoilers and plenty of carbon fibre thrown at it, while the Panamera Turbo gets a modest power boost, with an increase of 35bhp courtesy of a new exhaust. 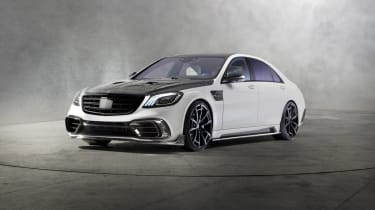 Along similar lines is the Mansory Mercedes-AMG S 63 Signature Edition. This features the usual raft of carbon bodykit upgrades, bigger wheels, lowered suspension and new lighting options, while again power has been boosted, with 700bhp on tap and a colossal 1,030Nm of torque. 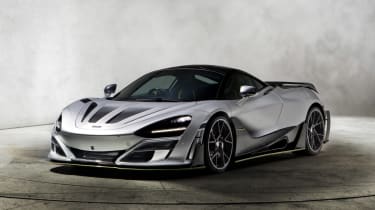 Finally, the McLaren 720S has alson gone under the knife. The Mansory First Edition is relatively restrained when compared with some of the company's other creations, but there's a new front splitter, bonnet, side skirts and rear diffuser, all in carbon fibre. There's also 20 and 21-inch wheels front and rear, while a new exhaust system boosts power to 745bhp.

Get all the latest news from the Geneva Motor Show here...