The latest Porsche Panamera gets sleeker and more practical, but does it work on the road? 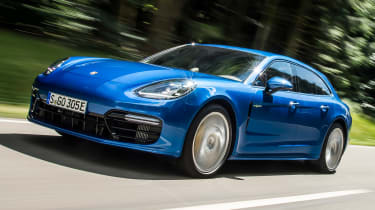 A moderately more useful Panamera, but in reality one that trades on its good looks rather than any significant increases in practicality. While the 4 E-Hybrid isn’t the pick of the range, the powertrain certainly seems to have improved over our earlier experiences of it, but it still sadly lacks the real driver appeal of its more conventionally powered relations.

Porsche has history with estate cars. The iconic Audi RS2 was partly a Porsche collaboration, and was even built at the German sports car maker’s plant in Zuffenhausen. The RS2 arguably kick-started the trend for super-wagons back in the mid-nineties. That resonates to this day, but it’s taken a while for the company to produce its very own.

First hinted at five years ago as a concept, the Panamera Sport Turismo has finally rolled on to the road. The production car has changed very little from that early design concept; the longer roof suits the proportions of the second-generation Panamera, the bigger hatch adding some usefulness.

Visually it’s transformational, then, but if you’re looking for a more practical Panamera then you might be a little bit disappointed. Most Panamera Sport Turismos offer 520 litres of space with the seats up, and 1,390 litres with them down, but Mercedes-Benz’s CLS Shooting Brake betters that with 590/1,590 litres. Choose this fuel-sipping Panamera 4 E-Hybrid and that shrinks a bit, to 425 litres and 1,295 litres respectively, thanks to an electric/petrol drivetrain that demands a little more room for packaging. 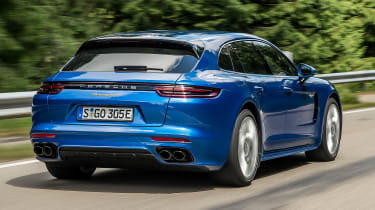 Twenty litres is the gain over the normal Panamera, which isn’t much, but then the access is easier, and those rear seats fold in a 40/20/40 formation. Push a button in the rear to unlock them and fold the seatbacks forward; the resulting floor is almost flat. Porsche even offers a load-retention kit if you’re serious about carrying stuff.

More importantly, perhaps, there are now three rear seats over the usual two. However, even Porsche somewhat apologetically refers to its new layout as a 4+1. That’s hardly surprising, either, because you’d never describe the raised centre cushion as a proper seat, or even as a useful occasional one.

The roofline does give a bit more rear headroom, but otherwise it’s all familiar Panamera, with a fine driving environment, neat finishes and easy operation of the infotainment functions and driving modes.

The 4 E-Hybrid adds some complexity to the driving mix with its various hybrid specific modes. These are numerous enough to necessitate more than simple selection via the wheel-mounted Mode Switch that’s standard here. Elements such as E-Hold and E-Charge will also require a degree of interaction with the touchscreen that dominates the centre of the dashboard.

In default Auto-Hybrid mode, the powertrain will push the Sport Turismo along in electric power as often as possible, using the 136bhp electric motor to maximise economy. It’s smooth, quiet and quick, too, and able to run the car up to and beyond UK motorway speeds.

Do so and you’ll do well to get near the 15-31-mile electric range Porsche quotes, let alone the 113mpg overall economy figure. Still, if you have a short, urban commute and like the idea of the 4 E-Hybrid’s duality, then there’s a place for it. 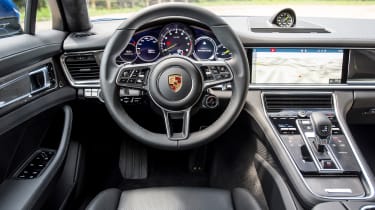 When the 2.9-litre biturbo V6 does fire up to join in, it’s more seamless than it was on our first acquaintance with the powertrain in the regular Panamera. Together, the two develop 462bhp, which is enough to haul the 4 E-Hybrid to 62mph in just 4.6 seconds. The hybrid’s systems now seem to be better integrated, while the brake and accelerator pedal feel far more conventional in their operation than early hybrid Panameras.

There’s still a great deal of weight to manage with this particular powertrain. The Sport Turismo rear itself adds only 20kg over its relation, but the powertrain of the 4 E-Hybrid’s weight unquestionably takes the edge off its agility. It doesn’t feel as nimble in bends and there’s more understeer, while the steering lacks the immediacy of other Panameras’. The ride is comfortable, though, and the standard air-suspension is smooth and cosseting, even on optional 21-inch wheels.

It isn’t, then, a Panamera brimming with driver appeal – more a tax dodge, or, increasingly, a diesel alternative.

A Sport Turismo adds £3,728 to the price of a regular Panamera, £1,581 of which is down to the necessity on early-order cars to have the panoramic glass sunroof. Open that and the Porsche Active Aerodynamics (PAA) will adjust the rear roof-top wing to help quieten the wind noise.