The Porsche Panamera 4 E-Hybrid promises performance and economy, but what's it like from behind the wheel? 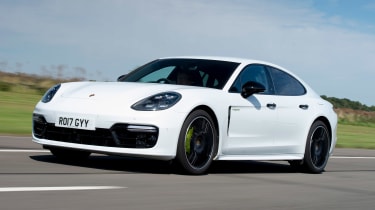 It’s hard to argue against the Panamera 4 E-Hybrid. The Porsche is fast, frugal and remarkably refined, and while the batteries do blunt its agility a little, the dynamic compromises are small. Yes, it’s more expensive than the petrol version on list price, but company car drivers will still save thousands on tax each year. Private buyers with a short commute and regular access to a plug could conceivably run the hybrid Porsche without ever having to visit a filling station, too.

As the Government slowly implements its push to clear the streets of diesel cars, many drivers are turning to hybrid and electric vehicles to save on tax.

But while lots will look at small EVs, crossovers and 4x4s, Porsche insists there’s a healthy appetite for electrified versions of its not-so-cheap Panamera saloon. The German brand now offers two plug-in versions of its revised Panamera – presenting all the leather-lined luxury and space you could want, matched to strong performance and low running costs.

We tried the latest plug-in Panamera at the start of the year and the belting Turbo S E-Hybrid last month, but now we’re driving the entry-level variant in the UK to see whether the formula suits busy British B-roads and congested city streets. 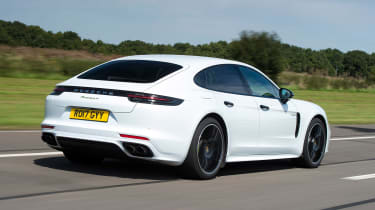 The Panamera 4 E-Hybrid costs from £81,141 and is available in standard and long-wheelbase Executive forms, as well as in sleek Sport Turismo guise. On paper it’s the most frugal Panamera ever, with fuel consumption of 112mpg and CO2 emissions of just 56g/km.

Those figures put it in a lower company car tax band than a Ford Focus, but to reach the E-Hybrid’s full economy potential you’ll need regular access to a charge point. Still, the 30 miles of electric-only range should suffice for most commutes.

The powerful electric motor not only allows a decent zero-emissions range, it also boosts performance. The cheapest plug-in Porsche will sprint from 0-62mph in just 4.6 seconds (vs 5.5 seconds for the normal Panamera 4) and hit a top speed in excess of 170mph. If there’s enough charge in the batteries, it’ll cruise happily at 86mph without any input from the engine, too. 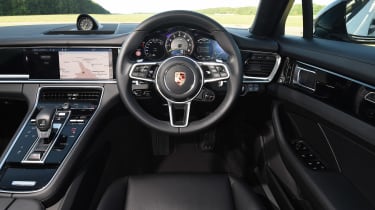 It feels agile as well. Extra weight means the E-Hybrid isn’t as responsive as the petrol V6 version, but the steering is sharp and in Sport+ mode you can throw the Porsche around with confidence.

Overall, the E-Hybrid is an incredibly refined car, both around town and on the motorway. There is a smooth transition between electric and petrol power, with little interruption from the engine when you ask for more. Its ride also impresses, with a good balance between comfort and control.

Yet the Panamera’s brakes are a little disappointing. The E-Hybrid never seems content switching between its regenerative set-up and the conventional discs, making it hard to modulate around town.

Like its pure-petrol sibling, the interior is a masterclass in design and functionality. It looks great, comes well equipped and feels better built than any Porsche that has come before it. The capacitive buttons work well, and the wide 12.3-inch touchscreen and clear dials are intuitive to use.

The driving position is spot-on, hugging you in all the right places without being too firm. Our car’s all-black dash and headlining made the cabin feel a little claustrophobic. But as with any Porsche, explore the options list and you can have near enough anything, in near enough any colour you want.