The Swiss all-electric startup has released more information about the Piech Mark Zero coupe, including performance figures and charge times 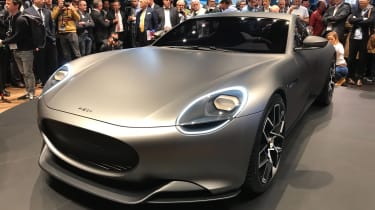 More specifications and a fresh batch of images and design sketches for the Piech Mark Zero concept have been released, following its debut at the Geneva Motor Show in March. The concept will evolve into a production model sports car (called the GT-2) over the next three years, with the Swiss firm planning to produce the first roadworthy prototype by spring 2020.

Piech’s all-electric coupe is powered by three 150kW electric motors (one on the front axle and two on the rear), producing a combined output of “about 450kW” or roughly 603bhp. Thanks to the car’s 1,800kg kerb-weight, should be considerable, with Piech claiming a 0–62mph time of 3.3 seconds and a top speed of 155mph.

The Mark Zero is fitted with the firm's new 70kWh lithium-ion battery and an energy recovery system, both of which have been developed in tandem with the Chinese electronics manufacturer, Desten. Piech claims the technology will offer the Mark Zero a WLTP range of 500km (around 310 miles). 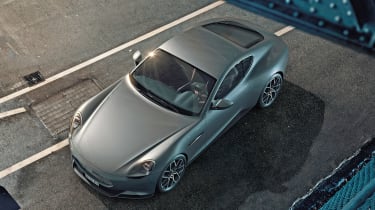 Thanks to a unique battery structure, Piech claims the Mark Zero will offer charge times comparable to refueling times for a combustion engined car, with the system being capable of charging from empty to 80 per cent capacity in a ‘record’ four minutes 40 seconds when plugged into the firm’s forthcoming fast charger.

Charge times should be equally impressive when using existing infrastructure, with Piech claiming an eight minute wait to charge to 80 per cent when using a 350kW fast charger. Andrew Whitworth, Chief Operations Officer at Desten, provides more information on the battery technology, stating:

“We were able to construct the inner workings of the cell in such a way that significantly stronger currents can flow, hardly any heat develops during charging and discharging, and the entire recuperation can be made much more efficient.”

The Mark Zero’s battery packs are mounted in the car’s transmission tunnel and on the rear axle, rather than under the cabin floor, which Piech states will provide a driving experience close to that of an internal combustion-engined car. The Swiss start-up also claims that the Mark Zero’s architecture will be modular, allowing its battery packs and hardware to be replaced as technology advances.

Piech will offer the production model Mark Zero coupe with a range of powertrains, including both petrol-hybrid and hydrogen fuel cell variants. In addition, the Swiss firm plans to make its platform available to other manufacturers. 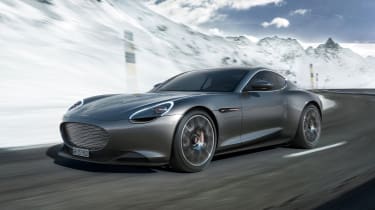 The Mark Zero concept’s styling hasn’t changed from its appearance at Geneva, retaining the traditional “long-bonnet, short tail” GT-car silhouette, borrowing styling cues from the Aston Martin DB9 and Alfa Romeo 8C. The quality of the final product should be good, too, with Piech planning to assemble the Mark Zero using German manufacturing practices.

Rea Stark Rajcic, the firm's co-CEO, discussed Piech's launch schedule, stating: "We decided first to develop the two-seat Piëch GT-2 sports car, which will be on the market in about three years’ time. This will be followed by the sporty Piëch GT-X SUV as a high-volume model before the four-seat Piëch GT-4 completes our product range."

Are you excited for the Piech Mark Zero concept? Let us know in the comments section below…