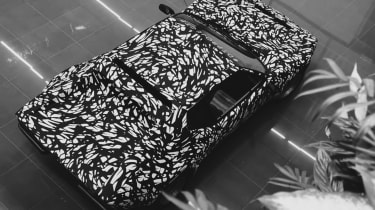 De Tomaso, the legendary Italian supercar manufacturer responsible for the 1971 Pantera, was recently acquired by the same team behind the Apollo IE hypercar. Neither firm made a formal appearance at this year’s Geneva Motor Show, but that didn’t stop the pair attempting to upstage the event.

Both the Apollo IE and an unidentified De Tomaso model were seen cruising around the event in heavy camouflage. We’ve seen the £2 million, 780bhp Apollo hypercar before, but details on the new De Tomaso remain a mystery. For now, all we have is the project’s potential name, hinted by the car’s ‘DTProjectP’ hashtag printed above its windscreen.

The teased De Tomaso model seems to feature a timeless “wedge-shaped” design, drawing influence from the classic Pantera and the Ferrari 308 GT4 Dino. We’re expecting it will be mid-engined and rear-wheel drive and,if Apollo applies the same philosophy as the IE hypercar, this new De Tomaso won’t feature any form of hybrid drive.

Apollo bought the rights to De Tomaso nameplate in 2014, following the Italian company’s financial collapse in 2004. Apollo then quietly registered a trademark for the brand in 2018, quickly followed by a redesigned logo and a series patents for the revived De Tomaso model.

Ryan Berris, General Manager and CMO of Apollo, commented on the secrecy of the project, stating: “How we operate is that we’re usually in stealth mode, there’s a lot going on behind the scenes – we’re not ready to make comment at the moment.”

Apollo’s acquisition of the De Tomaso nameplate could prove a beneficial expansion for the company. Currently, Apollo only builds limited-run, high-end hypercars to rival the likes of the Aston Martin Valkyrie and Ferrari LaFerrari. De Tomaso could instead act as a volume focussed supercar manufacturer, with a potential rival for the like of new Ferrari F8 Tributo.

This year marks De Tomaso’s 60th anniversary, so the brand’s resurgence seems timely. Further updates on Apollo’s plans for the brand will likely be revealed later this year.