Convertible Pagani Huayra gets 753bhp, a more aggressive look than the coupe and a £2 million price tag 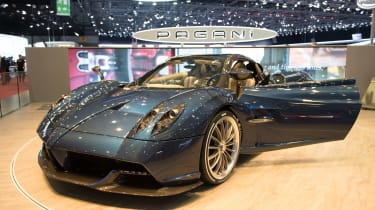 Pagani has revealed a convertible version of its Huayra hypercar at the 2017 Geneva Motor Show. It’s taken Pagani six years to debut Huayra Roadster – the coupe appeared at the Geneva Motor Show in 2011 – and in that time is has developed a roadster lighter than its hard top sibling.

The Huayra Roadster weights 1,280kg – 80kg lighter than the coupe. This weight saving has been achieved through the use of a newly developed carbon-titanium composite known as Carbo-Triax HP52, which means the Roadster is not only lighter, but a claimed 52 per cent stiffer. Further mass has been reduced through the use of a new aluminium alloy called HiForg to construct the suspension setup – a 25 per cent weight saving in this area. 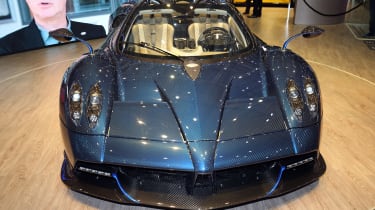 Under the rear clamshell, the Huayra Roadster gets Pagani’s trademark AMG-developed V12 engine. Using two turbochargers and benefiting from the developments applied to the engine used in the Huayra BC it delivers 753bhp and over 1000Nm of torque. Pagani hasn’t revealed any performance figures, but a 0-62mph dash around or even less than three seconds is likely. Mated to the engine is a new seven-speed sequential gearbox also developed for the hardcore BC.

In terms of design, the Roadster has been penned to look more aggressive than the hard top. At the front it gets a new grille design and wider wheel arches, while at the rear some of the aerodynamic flicks are more pronounced. Just behind the cabin, the carbon-fibre roll hoops funnel into a V-shaped clamshell lid with unique slashes and a small window placing the car’s AMG powertrain on show. 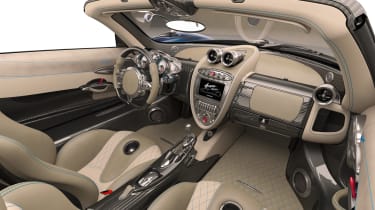 Active aerodynamic flaps – two at the front and two at the rear – work in tandem with a flat floor and the Huayra Roadster gets not one, but two different removable roofs. A carbon-fibre hard-top with a central glass element gives the Roadster a coupe look, but a fabric and carbon cover for a more traditional soft-top image is also available.

Pagani has revealed that the Roadster is priced from €2,280,000 before tax – around £2 million. Production will be limited to 100 units, but all have already been sold. We’ll bring you the inside line and more images of the Huayra Roadster when the car is unveiled at Geneva in March.

What do you think of the Pagani Huayra Roadster? Let us know in the comments!