Mazda hasn’t downsized the engine in its new CX-3 SUV. Can it still see off rivals like the Audi Q2 and Peugeot 2008? 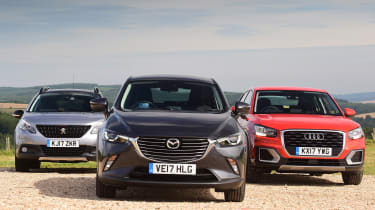 It’s not just SUVs that are getting smaller as their appeal gets larger. The engines inside their compact but jacked-up bodies are also shrinking rapidly in a bid to provide even more efficiency.

While this is the general pattern, one maker isn’t following the rulebook: Mazda. As with the original, it’s stuck to its guns with this new, revised CX-3 small SUV and elected to fit a naturally aspirated 2.0-litre petrol engine instead of the downsized turbo units commonly found in its competitors.

However, its two main rivals here conform to the industry-wide trend. Audi has launched a new variant of its compact Q2, with the 1.0 TFSI turbo now the smallest petrol engine offered across the range. Meanwhile, of the crop of mainstream SUVs, the Peugeot 2008 1.2 PureTech is a more premium choice, which is why it’s lining up here.

The winner of this encounter will have to offer strong efficiency, given the class requirements, but also the space, pace and quality buyers expect.

Read on to find out which compact off-roader stakes its claim as the best small SUV of the trio on test here. 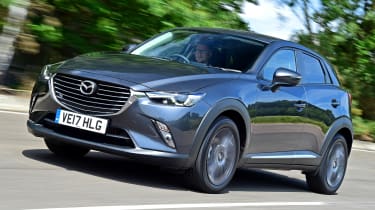 The stopwatch doesn’t lie and on test the Mazda’s relative lack of torque highlighted the fact that it’s less flexible than the Peugeot’s larger turbocharged engine in particular.

Although the Audi has a turbocharger to boost its torque, it actually produces 4Nm less than the Mazda’s 204Nm. However, the CX-3 reaches its peak at higher revs, which meant that its in-gear times in the higher ratios, where revs are lower, weren’t as quick as either rival’s; it took 9.0 and 13.0 seconds to go from 50 and 70mph in fifth and sixth respectively. 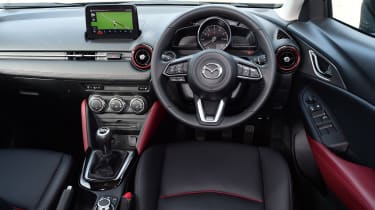 This encourages you to rev the engine towards its 6,000rpm power peak, and it’s fun to do so because the naturally aspirated unit responds well and pulls sweetly above 3,000rpm. When you do, performance is impressive, and the CX-3’s 9.0-second 0-60mph time meant it was the quickest car of the three.

Select the next gear with the nicely weighted six-speed manual box and, combined with the car’s chassis, it involves you further still.

The steering offers a fine balance of weight and communication, giving you a fair sense of the level of grip on offer – which is surprisingly high for a small SUV. You can turn the Mazda in at speed thanks to its decent body control, with the G-Vectoring subtly helping. It feels more natural than the Audi, where the torque vectoring by braking is quite intrusive, while there’s less roll than in the Peugeot. Despite this relatively rewarding dynamic edge, the damping is still plush and well controlled, tying the body down and offering enough absorption to soak up bumps mid-corner. 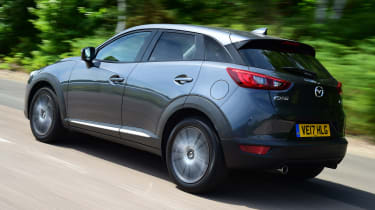 Testers’ notes: “The new engine mounts mean the Mazda’s 2.0-litre engine is refined, even at higher revs. Keep your foot down and there’s useful performance, but economy will take a dip.” 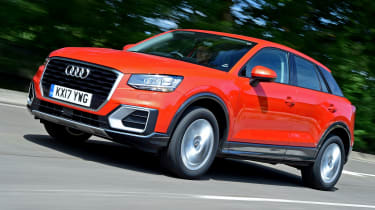 The Audi Q2 was launched last year, scaling down the firm’s successful SUV template one size smaller than the other compact SUV in the range, the Q3. The Q2 is for those on an even tighter budget who still want a premium crossover. However, at £21,360 for this entry-level 1.0 TFSI SE model, it’s still on the pricey side. Is it worth it?

On bumpy roads the Q2 doesn’t strike the same balance as the CX-3. It feels firmer and less composed over rippled surfaces, which means that although it handles well thanks to the firmer set-up, it does get disturbed more by mid-corner bumps and doesn’t have the same level of compliance as the CX-3 when the chassis is loaded up. It responds to rippled surfaces more abruptly than the CX-3, too, so isn’t as refined when cruising.

The steering is fast and lighter than the Mazda’s, but the weighting is still good and it’s heavier and a little slower than the set-up in the 2008. There’s very little communication from the chassis, though, while the systems sometimes feel as if they hold the car back in corners, fighting what you’re asking it to do. 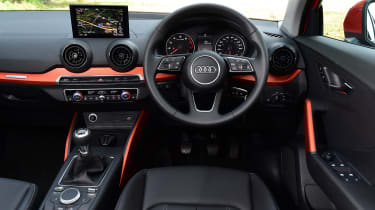 Engine refinement is good, as the 1.0-litre revs smoothly. It feels strangled at the top end compared with the CX-3’s, but the trade-off is that the turbo delivers decent torque in the middle of the rev range.

This showed on test as the Q2 accelerated from 50 to 70mph in fifth and sixth gear 0.7 and 1.6 seconds quicker than the Mazda respectively – although it still trailed the Peugeot’s performance, thanks to the French car’s torquier 1.2 three-cylinder.

Alongside the more knobbly ride there are one or two other factors that mark down the Q2. For example, the brake pedal feels far too sensitive, which sometimes makes it difficult to bring the car to a smooth stop. 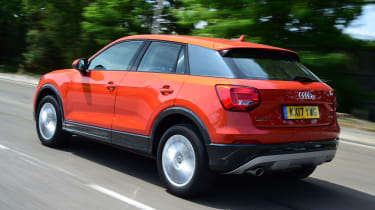 Testers’ notes: “Audi offers plenty of customisation on the Q2, with buyers able to choose from a range of colours for the C-pillar blades, for example.” 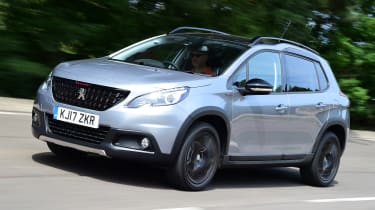 A revised version of Peugeot’s 2008 compact SUV was launched last year, retaining its premium appeal but adding a new trim level to the range. This GT Line spec costs £20,800 when fitted with the 1.2 PureTech 130 petrol engine, making it the cheapest car here. But does this count against it? 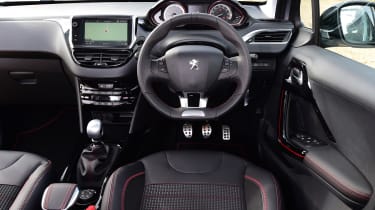 Its extra grunt meant it was quickest over all our in-gear tests, although the engine does surge and feels very boosty. It’s also the least refined power unit here, with a more rattly sound than the three-cylinder turbo in the Q2 and the naturally aspirated four-cylinder unit in the Mazda.

Despite its power advantage, the 2008 lost out over the 0-60mph sprint. This is partly because the gearbox isn’t as precise, so you have to be slower and smoother with your shifts. It’s as well then, that the torquier engine pulls well, because it means you don’t have to work the box as hard. The standard mud and snow tyres also let the 2008 down off the line because they don’t deliver as much grip as its rivals’ rubber.

The Peugeot’s chassis isn’t as composed as the Mazda’s, either, crashing over bumps and feeling skittish over broken surfaces. It also loses composure over sharp ridges, so feels much more at home on smoother, gently undulating roads. 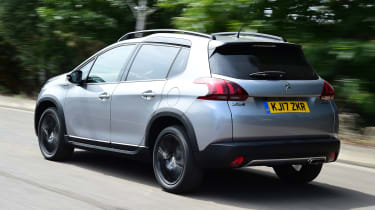 However, the small steering wheel makes the 2008 feel pretty agile, with only small inputs at the wheel needed to make the car change direction. The downside is that the softer suspension set-up means the chassis often can’t keep pace with your requests, so there’s more body roll in corners than would be ideal.

Testers’ notes: “Four-wheel drive is offered on some versions of the CX-3 and Q2, but not the 2008. This model gets Peugeot’s Grip Control, which has five settings to cope with different surfaces.” 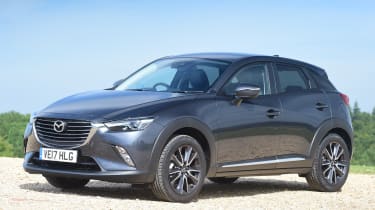 This is an extremely close verdict, but the CX-3 edges ahead of the Q2 again. It’s more comfortable and better to drive, while the performance difference will be negligible. You may have to compromise slightly on boot space, but there’s still enough practicality. However, it’s the extensive list of standard kit and attractive finance deals that see the Mazda take the win. 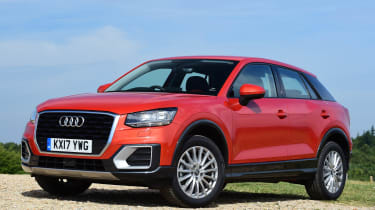 The 1.0 TFSI is the pick of the Q2 range. This small SUV is practical and offers premium appeal, but factor in the pricier finance deals and poorer equipment tally, and the Audi looks expensive, even if you’ll save a little on fuel. It also doesn’t ride or handle as sweetly as the Mazda, nor is it as comfortable, so with roughly equal cabin space, the Q2 just loses out. 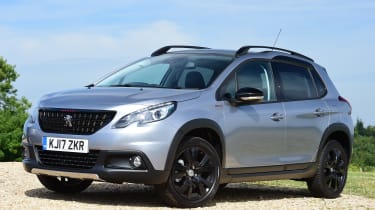 A strong engine and a big boot aren’t enough here, because the 2008 lacks the ride comfort and refinement of its rivals. It gets a good level of equipment, although it misses out on some important safety kit that’s standard on its competitors. It’ll be the cheaper option for business users, but while it offers a good level of practicality, the 2008 feels a generation behind. 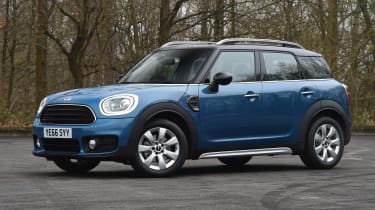 MINI’s new Countryman is more SUV-like than ever and scores on practicality with a 450-litre boot. It has a premium badge, an efficient downsized petrol engine and plenty of appeal. Options are expensive, but this is a solid SUV alternative. 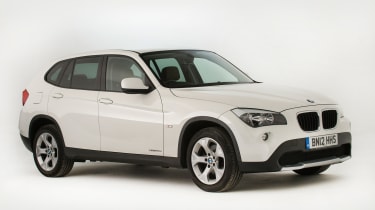 For slightly less cash you could bag a bigger car, if you buy used. BMW’s previous X1 offers more space. However, you’ll have to make do with a larger 2.0-litre engine if you want petrol power, so it’ll cost more to run.