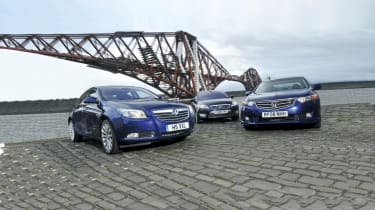 A new badge, a new name and a new class leader in the large family car segment? That’s what Vauxhall is hoping for with the UK launch of its Insignia.

Hitting showrooms next month, it’s initially available in hatchback and saloon bodystyles with a choice of two diesel and three petrol engines. It banishes the Vectra name to the history books – much like its predecessor did with the Cavalier – and it’s also the first car to feature Vauxhall’s new-look Griffin badge.

The reworked logo is designed to set a more exclusive tone – and with the Insignia promising to deliver new standards for comfort, premium materials and innovative technology, Vauxhall claims it’s more than just the badge that has moved upmarket.

There are five trim levels, and here we test the range-topping Elite, powered by the 158bhp version of the firm’s 2.0-litre CDTI diesel.

However, to come out on top in the family car market, there is a queue of capable rivals the Vauxhall needs to overtake. We have lined up two of the best in the shape of Honda’s latest and greatest Accord, and our current class favourite, the Ford Mondeo.

The coupé-inspired styling of the new Insignia means that there’s no mistaking it for a Vectra, but is Vauxhall’s family car good enough to beat its rivals? Read on as we deliver our definitive verdict.

At the start of this test, we set out to see if Vauxhall’s new family car is a class leader. But thanks to the abilities of the three models here, it’s not an easy question to answer. However, there is no doubt that the Insignia has returned the Luton-based firm to the top flight of the family car sector.

The newcomer is great value, well equipped and rakishly styled. The quality of its cabin is first rate and thanks to its superb ride few cars can match it for comfort.

It’s certainly a more practical proposition than the Honda, which finishes in an honourable third place. While it’s involving to drive and competitively priced, it lacks the space and long-distance refinement of its rivals.

The Insignia has certainly moved Vauxhall upmarket, giving the brand some much needed desirability. A particular high point is the solidly constructed, attractively styled interior.

But as a versatile family car, the Insignia has to move over for the Mondeo, which serves up a bigger cabin and larger luggage area. Better still, the Ford remains the benchmark in this class for driving dynamics.

So, although the Vauxhall is stylish and good value, it just misses out on top honours.