They both dare to be different, but which of the Nissan Juke and MINI Countryman Cooper S is the wiser buy? 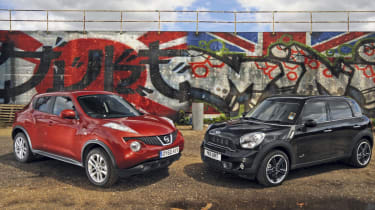 Is the writing on the wall for conventional hatchbacks? The two crossovers in this test suggest it could be, with their trendy looks, distinctive cabins and sporty turbos.

Nissan’s Juke has captured buyers’ imagination with its head-turning looks and competitive pricing. It is UK built, and small family models don’t get much more boldly styled...

Plus, if you want strong performance, too, the firm has it covered as the 1.6-litre DiG-T engine offers 187bhp and 240Nm of torque. The initials stand for Direct-injection Gasoline Turbo, and this unit puts the Juke within range of MINI’s Cooper S Countryman.

It has a price to match its premium image, and is bigger than the Nissan. However, its 1.6-litre turbo delivers hot hatch pace to go with its fun styling and five-door practicality.

As the biggest car ever to wear the British company’s badge, the Countryman isn’t universally popular with purists, but it still shares the unique appeal that makes modern MINIs so desirable.

Will all this justify the price of our ALL4 model? Or will the smaller Juke paint itself into fashion-conscious, go-faster folklore...?

Do the cars in this test repaint the family car landscape? No, but they are both interesting alternatives to established mainstream models. Their unique looks will attract or deter buyers in equal measure. However, their ability to turn heads and to place you above the surrounding traffic is key to their appeal. So which is the better choice?

The Nissan has price on its side, and more standard kit. Its punchy DiG-T engine also ensures performance is lively – if only it had the chassis to match. The Countryman provides more passenger space, a bigger boot and is far better to drive. Superior refinement and better quality also help to justify its hefty price premium. It is a stronger family choice than the cramped Nissan, and the ownership experience strengthens its appeal. Solid residuals and low running costs ensure the Cooper S Countryman is our victor.