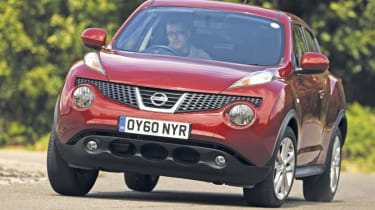 Fortune favours the brave – and Nissan is clearly pushing the old adage to the limit, as the Juke’s looks are sure to divide opinion.

Whatever you think of it, the compact hatch – penned at the company’s London design studio – is striking, and attracts a lot of attention wherever it goes. Given that Nissan took 10,500 orders in the five months following the car’s launch last September, it seems the motoring public has embraced the bold approach.

On the road, the raised height, chunky arches and confident stance give the supermini-sized crossover loads of attitude. Despite its 4x4-inspired proportions, the Juke’s top half clearly borrows its cues from a sports car, complete with a fastback-style rear and sharply sculpted headlamps.

This seemingly random mix of influences continues inside, where the high-gloss paint on the rounded centre console is said to have taken its inspiration from a motorcycle fuel tank. The busy interior is home to a wide variety of materials, and while the neat, ebony-effect D-Mode computer looks smart, some of the silver-effect trim round the dials seems cheap.

So although there is clearly an element of fun to the Juke’s cabin, it can’t match the premium feel of the admittedly more costly MINI. It’s not as practical or comfortable, either. The driving position is compromised by the fact there’s no steering reach adjustment, and the small back doors make access awkward.

Worse is to come, as the shorter wheelbase – a legacy of the Nissan’s supermini platform – ensures rear legroom is tight. Also, the shallow side windows and chunky C-pillars mean rear passengers will feel claustrophobic. The narrow boot has a small 251-litre capacity – a significant 99 litres behind the MINI.

However, the split floor does allow you to stow small items beneath. If the Juke isn’t a convincing family car, it must deliver on the road to stand any chance here – but the behind-the-wheel experience doesn’t live up to the sporty promise of the DiG-T unit. The lofty seating position, light steering and snappy gearshift mean it’s easy to drive and well suited to urban roads, yet its soft suspension thumps into potholes nearly as badly as the more stiffly sprung MINI.

Head out of town and the Juke continues to disappoint. In fast corners, excessive roll across the front axle causes the unloaded wheel to lose traction and the nose to run wide. This lack of dynamic composure is in stark contrast to the well sorted MINI. Add suspension that becomes fidgety and unsettled at cruising speeds, and the ride comfort isn’t great on the motorway.

The DiG-T engine proves the star of the Juke show then. It generates a surprising amount of induction noise, for a raspy, satisfyingly sporty soundtrack. The car delivers 187bhp – that’s 6bhp more than the MINI – and an identical 240Nm torque output, although the Brit has an overboost facility that adds 20Nm for extra overtaking urge.

Weight is key to acceleration, and as the smaller Juke is 140kg lighter, it wins the 0-60mph honours. It completed the sprint 1.2 seconds faster than the four- wheel-drive Cooper S, in 7.7 seconds. But the Nissan’s in-gear responses were more noticeable, particularly in our 50-70mph test.

The DiG-T model comes with a six-speed manual box as standard, although there is a 4x4 version which features a CVT auto. In range-topping Tekna trim, this costs £3,700 more than the front- wheel-drive Acenta Premium pack model in our pictures.

Even then, the all-wheel-drive Nissan is £1,910 cheaper than the 4WD MINI tested here. The Juke is great value for money and very well equipped, and is certainly something different – especially in DiG-T trim. But does it have enough substance to win?

Chart position: 2WHY: Nissan is the master of crossover models, and the Juke takes the formula that made the Qashqai a smash hit to the absolute extreme.