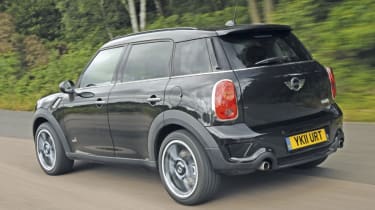 A tall-riding, five-door family car inspired by an SUV is about as far removed from the concept of Alec Issigonis’ original Mini as it’s possible to get.

But the Countryman is exactly what enthusiasts who have outgrown the company’s modern-day supermini models have been waiting for. The established retro-inspired looks have been stretched over a larger body.

Deciding whether this has been done with success is open to debate, but the Countryman is unmistakably a MINI. As you’d expect, plenty of attention has been lavished on the details.

They include chrome door handles and a huge hinged boot badge, which doubles as a tailgate release. Predictably, there’s huge scope for personalisation, and MINI has stuck rigidly to its established formula inside. Only the lofty view of the road reminds you that you’re not sitting in one of the firm’s hatchbacks. You still get an upright windscreen, while the large central speedometer dominates the dashboard. The rev counter is fixed to the steering column, and the round, eyeball-style air vents and low-mounted row of toggle switches finish the cabin.

The plastics look a little cheap in comparison to other MINI models, but they’re robust enough to survive the added abuse that comes with life as a family car. And the Countryman still has the edge over the Nissan in terms of quality.

It scores well for space, too. There’s plenty of room around the driver, and it’s easy to get comfortable, thanks to an excellent range of wheel and seat movement, plus reach and rake adjustment on the steering wheel. In the back, there’s more legroom than in the Nissan, and the 40/20/40 split-folding seats slide back and forth independently.

The boot is wider than the Juke’s, and the seatbacks fold with ease. There’s no spare wheel, and the deep recess this frees up creates a 350-litre luggage capacity. However, you don’t get a flat floor, which can be irritating when trying to fit larger items neatly inside. On the road, the MINI is more engaging than the Nissan. The weighty steering has a more positive turn-in, and there’s more front-end grip and noticeably less body roll, which helps to inspire confidence.

On the downside, the suspension set-up is firm. It’s fine on smooth roads, and the Countryman is more refined at motorway speeds than its rival, but it crashes violently into potholes and feels rigid over broken surfaces.

At the test track, the MINI recorded superior stopping distances to the Nissan, and the perfectly placed pedals and snappy gearshift are certain to appeal to keen drivers.

Judged on pure pace, the Juke has the upper hand, and the heavier MINI feels slower to respond to prods of the throttle. Its smooth 1.6-litre engine is willing and refined, though. Better still, our car’s ALL4 drivetrain gives genuine all-weather ability and year-round appeal. Yet there’s no escaping the Countryman’s high price.

Chart position: 1WHY: A MINI that isn’t miniature is just what the brand needed. New Countryman is perfect for buyers who have outgrown one of the manufacturer’s famous hatchbacks.