Amphibious cars have always been a bit of a compromise. Although they can travel on water and land, nobody has made one that is actually very good in either environment - until now. 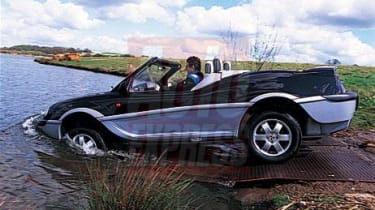 The Gibbs Aquada is fun to drive on land and in water. Despite its ride height and boat-like body, it feels quite sporty. The only problem is the huge price tag. However, it's designed as a millionaires' plaything, and they probably have a garage full of cars already.

Amphibious cars have always been a bit of a compromise. Although they can travel on water and land, nobody has made one that is actually very good in either environment - until now.

Gibbs Technologies, based in Nuneaton, Warwickshire, claims its Aquada is a sports car and a speedboat all in one. To find out if these bold claims are true, Auto Express got behind the wheel for the first ever UK test drive.

From the front, the Aquada looks like a beefed-up Mazda MX-5 - mainly because it borrows its headlamps from the roadster. However, jump inside and the similarities end. For a start there are no doors, so you enter by climbing in over the side - as you would a boat. Also, there are three seats rather than two, with the driver positioned centrally - as in the McLaren F1 - and you sit high up, similar to an MPV.

Power comes from the 2.5-litre V6 petrol engine used in the Land Rover Freelander. It's mid-mounted and connected to the rear wheels via a four-speed auto gearbox. With 175bhp on tap, the unit propels the Aquada from 0-60mph in about 8.5 seconds and on to a top speed of 110mph. The engine sounds fantastic under acceleration and emits an intoxicating thrum from the air intake. However, as the speed rises, so does the wind buffeting, and the lack of a roof means there's absolutely no protection from the elements.

It may be a boat on wheels, but on the road the Aquada handles more like a genuine sports car than a barge. Its Citroen-sourced gas suspension has been stiffened to give a firmer ride, and the car's cornering ability belies the lofty ride height and 1,450kg weight.

Near-perfect weight distribution, plus a huge front anti-roll bar, help it remain flat through even the tightest of turns. Also, the steering is incredibly direct, and it's possible to tighten your line mid-bend using the throttle - just as you would in a proper sports car.

Be warned, though, as the Aquada's considerable bulk means it needs to be treated with respect when pressing on. Fortunately, the brakes are impressive and provide more than enough feel, although there's no ABS. In fact, safety equipment is rather limited, apart from the flares, life jackets and fire extinguisher included as standard!

The Aquada is pretty impressive, and more fun to drive than a lot of modern saloons. But for the £150,000 asking price you could buy a Ferrari 575M.