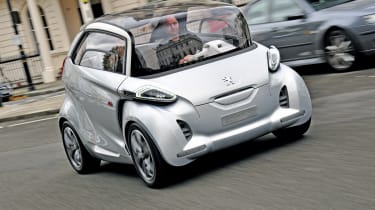 In terms of exciting design, Peugeot has turned a corner, and the BB1 is its bravest project yet. Combining stand-out styling, zero emissions and space for four, what’s not to like? Best of all, the components, such as the Michelin-developed hub motors, are available off the shelf right now. The French company is in the process of gauging public opinion on its radical redesign of the traditional city car, and the feedback is already positive.

Peugeot has revealed its vision of the future, and it’s called the BB1. With its out-of-this-world looks and ingenious packaging, the electric city car took the Frankfurt Motor Show by storm in September. And now Auto Express has been invited to take an exclusive drive in the most exciting concept car of the year!

At 2.5 metres long, the BB1 is shorter than the Smart ForTwo and Toyota iQ – by 20cm and 49cm respectively – yet crams in four usable seats. Front occupants sit in a more upright position than in a conventional car, while rear passengers wrap their legs round the back of the front seats. Go for a drive on your own though, and there are 855 litres of load space on offer. The BB1 is operated by bike-style handlebars, complete with a twist-and-go throttle and brake lever to replace a traditional steering wheel. So there’s no need for pedals on the floor.

Under the carbon fibre skin, the tubular chassis has been designed by Peugeot’s motorbike division, emphasising the two-wheel connection. Due to the lightweight construction, the BB1 tips the scales at less than 600kg, even with heavy lithium-ion battery packs sitting under the rear seats. Twin 10bhp electric motors, mounted inside each of the back wheels, provide plenty of performance around town. Acceleration off the line is brisk, and the BB1 feels faster than its 20bhp figure suggests. Unusually, under full throttle the rear squats down, the nose dives under heavy braking and you find yourself leaning into the bends – much in the same way as a motorbike.

How the public reacts to such an unconventional machine is currently being gauged as the BB1 tours Europe. But according to bosses, it’s already been earmarked for production. Going by the stunning RC Z coupé, which made it from concept to reality in two years, a showroom BB1 could be with us by 2011.

Rival: Smart EV With a range of 71 miles and acceleration from 0-30mph in 6.5 seconds, the Smart EV is a direct competitor. A few will be leased here in spring, followed by a production car in 2011.