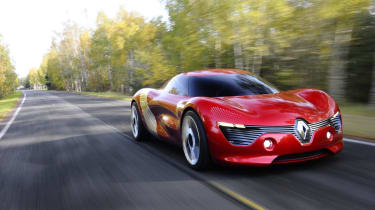 The DeZir proves that Renault’s electric technology has promising potential for performance models. It’s  also an exciting glimpse into the future styling of the company’s products – everything from the next Clio to the all-new Laguna. Judging by the attention to detail and head-turning good looks, next-generation Renaults appear certain to be some of the most attractive cars on the road.

It’s a supercar named DeZir,  and Auto Express has driven it!
[[{"type":"media","view_mode":"content_narrow","fid":"69301","attributes":{"alt":"","class":"media-image"}}]]
The all-electric Renault  concept wowed the crowds at last month’s Paris Motor Show, but we’ve been given exclusive behind the wheel access to deliver our verdict and tell the full story behind this French flier.
This is the first in a series of  six Renault concepts, scheduled to be revealed over the course of the next two years. Each one will help to spell out a brand new styling language for the marque, under the leadership of design boss Laurens van den Acker.  For example, the enlarged Renault badge and full-length slatted grille will become the  face of all future models.
The DeZir is stunning in the metal. It cuts a menacing shape  at two metres wide and just over a metre high. Head-on, the full-width grille is flanked by narrow lights with LED ‘eyelids’ above, while the silver side-blades ahead of the rear wheels are reminiscent of those seen on the Audi R8.
Step into the cabin via one of the asymmetric scissor doors, and you’re greeted by a curvaceous one-piece seat, finished in white with embedded red ambient lighting. You can adjust your  position at the flick of a switch, moving the whole bench back and forth. The asymmetric theme continues throughout, with the passenger side finished mostly  in white, and the driver’s  side predominantly red.
You sit low in the cabin, and  it could easily be claustrophobic, but the wraparound windscreen – which merges almost seamlessly into the side windows – makes it feel incredibly spacious. There’s no rear window, but a pair of cameras mounted on the roof beam the rear view on to a  display mounted where the  interior mirror would normally be.
Starting the DeZir is as simple as pushing a button, slotting the glass and leather gear selector into drive and pulling away. The powertrain underpinning the whole package is the same  as the one in the upcoming Fluence Z.E., yet it’s been  tuned to produce 148bhp.
[[{"type":"media","view_mode":"content_narrow","fid":"69301","attributes":{"alt":"","class":"media-image"}}]]
That may not sound like  much for a supercar, but the DeZir weighs only 830kg, thanks to its lightweight tubular steel chassis (similar to that of the Mégane Trophy race car) and Kevlar body panels. Floor the throttle, and as the electric  motor whines noisily, the Renault rockets from 0-62mph  in five seconds – although from behind the wheel, we didn’t get a real sense of this pace.
While it may be noisy on  the inside, at city speeds it’s  virtually silent to pedestrians. That’s why engineers have  developed a warning noise  that functions up to speeds  of 30mph. It’s reminiscent of  the sound of a spacecraft in a  science fiction movie, and gets higher in pitch as you accelerate.
The taut chassis and huge 21-inch alloy wheels mean  it’s no surprise that the DeZir isn’t the most comfortable car  to drive, but it does corner well. Turn the wheel, and the car responds quickly, while the  stiff suspension eliminates  any trace of body roll.
It’s not all about performance, though. Thanks to that low weight and a drag coefficient of only 0.25Cd, the DeZir claims a range of 100 miles after an eight-hour charge from a household socket. It can also be powered to 80 per cent capacity in 20 minutes via  a 400V quick-charge point.
Unfortunately, there are no plans to translate the car directly into a showroom model, but it does provide a glimpse into Renault’s performance future. And engineers are pushing  for a petrol-powered DeZir  to go into production... let’s hope they get their way!
Share this on TwitterShare this on FacebookEmail