Think of Vauxhall and you probably conjure up Vectras, Astras or Corsas. All are fine cars in their fields, but do little to stir passion. It's a problem that has long affected the marque, so in 1999 a trophy model arrived to lift its image. That vehicle was the VX220 - developed by Lotus on an Elise chassis. 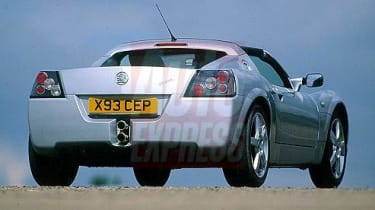 Think of Vauxhall and you probably conjure up Vectras, Astras or Corsas. All are fine cars in their fields, but do little to stir passion. It's a problem that has long affected the marque, so in 1999 a trophy model arrived to lift its image. That vehicle was the VX220 - developed by Lotus on an Elise chassis. The newcomer certainly had the desired effect. While VX sales have been fairly slow, it is regarded as one of the finest sports cars available. Secondhand, a VX220 is enormous fun and excellent value. But beware, as many have been abused on track days, and Lotus build means they're much more fragile than most Vauxhall family cars.Checklist * Interior: not much can go wrong in the basic cabin, but window winders can fail. With no cockpit air filter, a mesh over the intake will stop road dirt getting inside. * Bodywork: fibreglass bodywork is prone to chips, while the front number plates also get knocked off regularly. Water entering the headlamps is another common fault. * Engine: the Vauxhall-built 2.2-litre units are bulletproof if regularly maintained. The turbos are more fragile - look out for white smoke under hard throttle. * Steering: ball joints wear out on hard-driven cars at about 30,000 miles. Excessive play or bumpy feel in the steering are also signs of a tough life. Track days may have damaged front wishbones. * Chassis: avoid cheap accident-damaged cars sold as repairable. The aluminium chassis requires specialist attention and cracked fibreglass can't be patched.Driving Impressions Though luxurious when compared to the Elise, Lotus's influence on the VX is clear as soon as you climb behind the wheel. You have to slide through a tight gap between the sill and the roof, but the driving position is very comfortable. You fire the car up by turning the key, then pressing a starter button, causing the exhaust to crackle into life. Performance is superb - even from non-turbos - while the brakes, steering and chassis are among the best on a sub-£30,000 car. That makes the Vauxhall one of the most raw-edged vehicles ever, although it's not for daily use. It has a hard ride, excessive wind noise and lacks practicality, but for driving pleasure it's almost unbeatable.Glass's View Despite its on-track competence, questionable marketing of the VX220 failed to attract much demand when new, and that situation remains. It is not desirable for day-to-day use, and Vauxhall's unsporting image tends to drive buyers towards the likes of Caterham, Lotus or Westfield. But those in the know are aware that the VX220 is a fine machine, and that keeps prices of well looked after examples steady. Although pricier, these make the most sense if you're buying. Jeff Paterson, Senior Editor, Glass's GuideLife With A VX220 Fantastic! This is easily the most focused car I have ever owned - and I have had two Porsche 911s in the past. The VX is a great weekend plaything, and I can't believe that it's a Vauxhall. Julian Porteous, Nantwich, Cheshire I love my VX, despite its design flaws, such as a leaky roof and cramped cabin. It isn't hugely practical, but I don't care. You can live with it. James Ashton, Chesterfield, Derbyshire

Eat your hearts out Vectras and Corsas - the VX220 proves you can have fun in a Vauxhall. Working with Lotus has produced one of the finest driver's cars in the world. Think of it as a MkII Elise and you won't be far off. The engine makes it easier to drive, it looks more modern and the handling is less tricky, but still involving. However, it's no everyday alternative to a Mazda MX-5. The only disappointed buyers will be those who can't get on the waiting list.