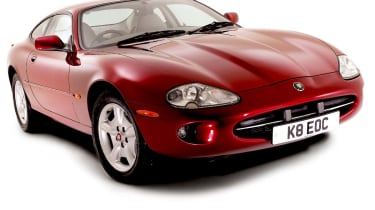 It looks a million dollars, but you can now buy a decent Jaguar XK8 for less than £10,000. When it replaced the XJS in 1996, the pretty coupé was hot property, but its premium price tag days are now over.

As a result, it’s an affordable alternative to younger mainstream rivals, and thanks to its V8 engine and automatic gearbox, a great drive, too.

ChecklistGearbox: automatic box is sealed for life, so its oil can’t be renewed or its level checked. Take any car you’re considering for a decent test drive – ensure all the fluids are up to temperature – and make sure it changes ratios smoothly.

Engine: the Achilles Heel of early XK8s is the engine, which can self-destruct due to high levels of sulphur in petrol. This affects cars built before 2000 – wear may have occurred, but most affected engines have been replaced by now.

Timing chain: chain tensioners are known to let go, wrecking the engine in the process. Spend £1,000 on new chains and tensioners if the car is still on its originals as a precaution – the powerplant can sound healthy right up to the end.

Suspension: the front wishbone bushes can become loose, as can the wheel bearings, which may result in uneven tyre wear. Renewing the bushes is typically £450, while you should expect a £300 bill to fit fresh wheel bearings.

Wheels: check that the alloys haven’t been badly kerbed – it’s easily done and they’re expensive to replace or refurbish. If the car is fitted with optional 20-inch three-piece rims, it can cost more than £3,000 to buy a set of replacements.

What to look for Standard 18-inch tyres for the XK8 are notoriously tricky to source, as they are often out of stock – so ensure there is plenty of tread left on the rubber of any potential purchase, especially as they are costly to replace. Don’t expect to use the back seats for carrying people; rear space is strictly for luggage only. And be wary of paying over the odds for a recent car – the arrival of the new XK will quickly push values down.

Owner comment Last year, Tony Morley from Lewisham, south London, bought one of the earliest XK8s. “I paid £15,000 and the car is worth every penny for the beautiful shape alone. It still stops people in their tracks, but has the power and luxury to back up its looks,” he said. “It’s so usable that if I could afford it, I would drive it every single day. Unfortunately, it is pretty expensive to run if you cover a lot of miles, due to the high fuel consumption.”

Towards the end of its life, new versions of the XK8 were difficult to recommend because of their big price tags. However, if you buy a second-hand example, you will pay a fraction of that figure – and that’s what makes Jaguar’s luxurious GT a tremendous proposition.

If you want a car that oozes glamour and style, this is it! As with any luxury model, running costs are higher than for a mainstream alternative. However, sign up to the Allegiance programme – for vehicles more than three years old – and you’ll get a 20 per cent discount on labour rates and 10 per cent off parts.

We like: the gorgeous styling, pace and refinement and excellent used value