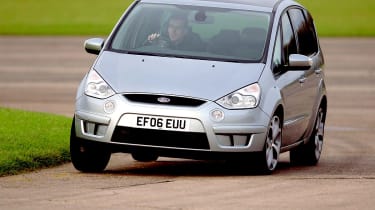 According to Ford, the S-MAX is unique, as it doesn’t fit into existing class boundaries. Why? Because it’s a family MPV that was designed from the outset to be sporty. As such, this may well be the holy grail for families – a people carrier that’s cool to be seen in.

The firm’s model strategy is unusual – Ford’s Focus-based C-MAX should be a more natural rival for the C4, but it only seats five. The S-MAX is bigger – not only larger than the Picasso, but 42mm longer than the full-size C8, with a wheelbase 122mm up on the C4.

Yet thanks to its sporty stance, the Ford doesn’t look huge. The roof slopes down at the rear, while the details, such as the prominent front foglights and side vents, set it apart.

The general air of quality impresses, too – the doors shut with a reassuring thud, while the tight-fitting trim and high-class cabin materials are real plus points. How­ever, its sweeping centre console and conventional transmission tunnel mean it doesn’t have the spacious feel of the Citroen.

The driving position is excellent, though. It’s lower and more car-like than the Picasso’s, with a seat that offers excellent support and plenty of adjustment. The dash layout is traditional compared to the Citroen, but it’s logical nonetheless, and while it can’t match its French rival for stowage, you do get large door pockets, a dash-top bin and drawers under the front seats.

The S-MAX uses the same platform as the next-generation Mondeo, and while its rivals have compact hatch underpinnings, the Ford’s larger floorpan undoubtedly helps interior space. For instance, the middle row offers the same room in the furthest forward location as the C4’s seats do in their rearmost position.

While the back row folds on to, rather than into, the boot floor, the S-MAX offers a similar amount of space to the Picasso. If you’re carrying cargo as well as kids, it has a much bigger luggage capacity in seven-seat mode. What’s more, when all the seats are folded, the load area is completely flat. The outer pair in the middle row tilt and slide to give decent access to the rear chairs, and all the seat mechanisms feel robust,

On the downside, the tailgate is heavy, there’s no opening glass option as with the Picasso, and the cabin isn’t packed with as many smart features either. However, driver enjoyment is the S-MAX’s key selling point, and it doesn’t disappoint.

The Ford is much more involving than its rivals. Steering feedback is impressive, while the turn-in is positive and sharp. Body movement is well controlled, and the suspension, while stiffer than the Picasso’s, strikes an excellent balance between ride and handling. Damping remains composed over bumpy surfaces and the S-MAX manages to be both entertaining and relaxing to drive.

All the controls have a weighty feel, and the conventional six-speed gearbox has a slick action. The 2.0-litre model we tested obviously had a clear performance advantage over its rivals, but our noise figures proved it wasn’t as refined as the C4.

Pricing is an issue, though. Despite undercutting the platform-sharing Galaxy by a fair margin, the S-MAX is expensive compared to its rivals here – particularly since our car was in top-spec Titanium trim. We would recommend looking at the 123bhp 1.8 TDCi instead, which starts at £17,795.

Price: £21,495 nowModel tested: Ford S-MAX Titanium2.0 litre/141bhpChart position: 2WHY: The S-MAX comes in LX, Zetec and Titanium trims, with two petrol and two diesel engines. The closest rival to the Picasso in the range is the £17,795 1.8 TDCi in LX trim, but because we were unable to get hold of that model, we are driving the more powerful newly uprated 2.0-litre TDCi version in Titanium trim.

It’s the heaviest by 169kg, so we didn’t have high hopes for the S-MAX’s economy – and it has the worst claimed figures, too. However, the 2.0 TDCi returned 38.7mpg, second only to the Picasso.

The Ford is the strongest residual performer of the group at 48 per cent. However, it’s not the best model in the S-MAX range – the smaller 1.8 TDCi LX has a retained value of 50.9 per cent.

With 714 dealers, Ford has the biggest network of outlets, so owners won’t have to travel far for servicing. Costs are reasonable – the first three visits total £565, but the S-MAX only has a 12-month recovery deal.

The S-MAX is the most expensive car here, so although its emissions are lower than the Mazda’s, it is the priciest company option. Low band owners will face an annual bill of £1,088, before options.