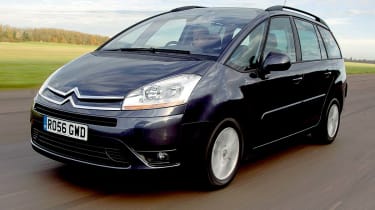 Take a look at the standard C4 hatch or the C6 flagship saloon, and it’s clear Citroen – recently more famous for its bargain cashback deals – has finally rediscovered its design flair and innovation.

The new C4 Picasso is the perfect example of the firm’s new-found confidence. It’s a good-looking compact MPV, with well proportioned dimensions and modern, clean lines, while the huge curving windscreen dominates the front-end styling.

Once inside, the sheer amount of glass, combined with narrow A-pillars and large quarter light windows, means the new Picasso offers class-leading visibility. The cabin also feels very spacious, as there’s nothing but storage trays between the front seats – although they are rather shallow.

The interior is well laid out, and features the now trademark fixed-hub steering wheel. You also get the central instrument binnacle, air freshening cartridge and textured plastics of the C4 hatch, while two large cubbies are placed in the top of the sweeping dash. The driving position is fine, while the seat offers enough support and is comfortable on long trips. In the middle row, there are three separate sliding chairs, each with Isofix child seat mountings. Legroom is good in the furthest back position and there’s decent shoulder space, while the middle occupant benefits from a flat floor.

Best of all is the seat operating mechanism – just pull a handle on the back and the base flips up. The chair then slides forward to give excellent access to the third row. The rearmost seats flip out of the boot floor with ease, and there’s enough room to carry adults if you slide the middle row forward. However, luggage space with all the chairs in use is no match for the S-MAX. For maximum load cap­acity, all the rear chairs fold to give a flat floor.

A relaxed driving experience matches the new Picasso’s functional and modern cabin. There are few thrills to be had, but it’s safe and reassuring on the road. While lacking the sharpness and feel of the S-MAX or Mazda 5, the Picasso still turns into corners with confidence, and despite more body movement, always remains composed.

The ride is also accomplished – it soaks up bumps with ease and is supple enough to isolate imperfections from the cabin. Excellent noise insulation makes the Picasso refined on the motorway, too. With a predicted five-star Euro NCAP crash test rating, standard stability control and the shortest 60-0mph stopping distance in our braking tests, safety is also a strong point.

The automated manual gearbox has a slightly jerky shift, but the 1.6-litre HDi engine is well mannered. Power delivery is smooth, with enough pace in most situations. The Citroen struggles slightly at higher speeds, however, where the common-rail diesel often feels out of puff. And another stumbling block could be the build quality. Although reasonable on the whole, the driver’s armrest on our test model had worked loose and the rear blinds often jammed when retracted.

However, standard kit is generous. This helps justify a price that Citroen fans might consider steep. The firm estimates that the VTR+ model we tried will cost in the region of £18,500, which makes it more expensive than the Mazda and not that far off the Zafira. This means securing one of Citroen’s famous price incentives could be more important than ever for British buyers.

Price: £18,500 (est)Model tested: Citroen C4 Picasso VTR+ 1.6 litre/108bhpChart position: 1WHY: On sale from January, full prices, trim and equipment levels for the new C4 Picasso have yet to be released, but expect it to cost more than the Xsara Picasso it replaces. Two 1.6-litre diesels, plus 1.8 and 2.0-litre petrol engines, form the line-up, and our car is a 108bhp oil-burner fitted with the six-speed electric gearbox.

With a claimed figure of 49.6mpg on the combined cycle, around 5mpg better than any of its rivals, the C4 Picasso should be economical. And so it proved, with an average of 39.6mpg while with us.

Our experts have yet to calculate residuals for the C4 Picasso, but Citroen will hope it improves on the Xsara Picasso, which tumbled due to the company’s bargain pricing. A 1.6 HDi LX holds 35 per cent of its list price.

Dealers have yet to finalise servicing costs for the Picasso, but buyers can expect similar prices to the C4 hatch. However, three years’ work on a 1.6 HDi totals £699, which is more expensive than rivals.

Prices for the Picasso aren’t confirmed, but low emissions will boost its appeal with company drivers. Citroen estimates our test car will cost around £18,500, so low-rate users will pay £815 a year.