Vauxhall's Zafira was a pioneer in the compact MPV sector, but can it still shape up? 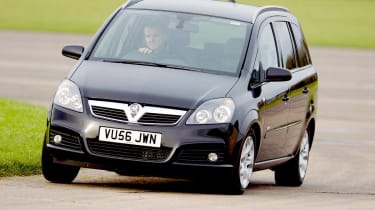 It’s true to say that the Zafira transformed the compact MPV class. With seven seats, low running costs and plenty of family-friendly features, it’s no wonder sales were so strong. And the sharper lines of this second-generation model have helped to give the car a bit of street cred.

Inside, there’s the familiar Flex7 folding seat system, which hasn’t been changed or updated. However, the sector has moved on, layouts of rivals have become more ingenious and as a result, the Vauxhall doesn’t offer class-leading space or functionality any more.

It has the shortest wheelbase here, so there’s less legroom, while the middle row only has a sliding bench. This limits versatility, and access to the back seats is tighter than on rivals. Operating the extra chairs is more laborious, too – the middle bench has to slide forward in order to raise them.

The driving position feels confined compared to the Citroen, while the Vauxhall has the thickest A-pillars, which cause nasty blindspots. The dash layout is also uninspiring; it’s not as simple as the Mazda’s or as fresh as the C4’s. There’s a lack of stowage, too, but the cabin is well built.

On the move, the Zafira isn’t as good to drive as its rivals. The clutch is springy, the manual gearbox isn’t very smooth and the steering lacks feel. That’s a shame, because the handling, while not as involving as the S-MAX’s, is safe and predictable. The suspension is certainly less comforting than the Citroen’s on the motorway. All of this means that although kit levels are reasonable, the Zafira doesn’t represent great value for money.

Price: £19,175Model tested: Vauxhall Zafira Design 1.9 litreChart position: 4WHY: With its innovative Flex7 folding chairs, the Zafira pioneered the seven-seat compact MPV trend, and its 48-strong model line-up is huge. We test the 1.9 CDTI diesel in Design trim. With 118bhp, it has a bigger power output than the Picasso, although it’s likely to be more expensive than its French rival when it comes to list price.

The 118bhp version of the Zafira CDTI was no more fuel efficient than our long-term 150bhp version, returning 36.9mpg. It has the smallest fuel tank, but a range of 475 miles is still impressive.

It may be a big seller, but Zafira residuals have suffered. However, this Design model is one of the better performers at 41.2 per cent. SRi models with the higher output engine also perform well.

The Vauxhall appears pricey when it comes to servicing, at £590. But the Zafira requires attention less often at every 20,000 miles. The Vauxhall also comes with three years’ free recovery.

The Zafira is the second cleanest car after the Citroen, but the £19,000 price tag means tax is nearly as expensive as the S-MAX. Lower band owners will pay £970 a year – £118 less than the Ford.