It seats only five, but Honda offers quality and great engineering 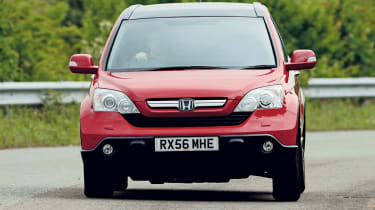 According to Honda, refinement was its priority when developing the third-generation CR-V. The Japanese firm wanted to create an SUV that was as good to drive as a saloon, but still offered the practicality buyers needed. Subsequently, the designers tried to incorporate as many features from four-door and estate cars into the latest CR-V’s styling – and we think it’s a real success.

It’s marginally taller than both rivals here, but the well proportioned lines disguise this well. The lower half of the body looks chunky, with black plastic sump guards and flared wheelarches, while the top half is much smoother thanks to a window profile that arches at the rear. We’re not totally convinced by the slightly fussy nose but it’s by far the boldest design here, and has more of a premium appearance than either rival.

This air of quality is also apparent inside. From the leather seats to the stylish steering wheel and clever handbrake, there’s a real sense of sophistication about the cabin. Build quality is the best on test, as is the driving position, which is enhanced by the high-mounted gearlever.

Despite being 100mm shorter than its rivals and having the smallest wheelbase of our trio, the Honda offers plenty of space for passengers. It doesn’t feel quite as roomy as the Santa Fe – not helped by the black leather trim – but there is ample legroom and the flat floor is good news if you have three in the back.

But this is a major stumbling block for the CR-V – it can seat a maximum of three in the rear, as opposed to five in the other two cars. A third row of chairs doesn’t feature on the options list, and this limits its practicality as family transport.

The i-CTDi diesel engine compensates for this, though, delivering the best performance here. It’s helped by the slick six-speed gearbox – this is shared with the Accord, but has been adapted for four-wheel drive. The powerplant picks up strongly from below 1,500rpm, and at the test track, the CR-V recorded the fastest 0-60mph time, at 9.3 seconds. It also had the best in-gear performance, with 30-70mph taking 9.6 seconds – three seconds quicker than the Santa Fe.

Out on the road, the engine’s punchy nature makes the Honda the best option for long trips, and overtaking presents few problems. Our sound meter readings showed it wasn’t as quiet as the Hyundai, but the sixth gear means it’s refined at motorway speeds.

When it comes to cornering ability, though, the CR-V easily outshines the Santa Fe, with an agile and responsive nature that belies its size. Its centre of gravity is 35mm lower than the previous-generation Honda’s, which has boosted stability and made it very car-like to drive.

It’s not all good news, though, because while the sporty suspension is good for handling, the trade-off is limited comfort over bumpy roads – especially for passengers. But that doesn’t detract from what is an excellent driver’s car.

On top of that, the CR-V is great value. While a price of nearly £25,000 seems a lot compared to the Chevrolet, this flagship EX model is very well specified. Heated and leather seats, parking sensors, sat-nav, an MP3 input and Bluetooth phone connectivity all come as standard.

Our car also had the optional Advanced Safety Pack, which brings adaptive cruise control, active front lighting and the collision mitigation brake system – although at £2,000, this isn’t cheap.

A 36.4mpg average makes the CR-V marginally the most frugal of our three cars. Over the course of a year, though, you’ll fork out £1,458 at the pumps – which means a saving of only £112 over the thirsty Chevrolet.

It's no great shock that the Honda tops the residuals table. A strong reputation for reliability and solid build means used CR-Vs will always be sought after. After three years, the car will still be worth £13,273 – or 53.7 per cent of its cost new.

Honda dealers fared even better in Driver Power, coming second overall – so buyers will have plenty of reason to be confident about the quality of service. Yet as with the Hyundai, £685 for the first three check-ups is expensive.

An output of 173 g/km of CO2 is very impressive considering the Honda engine’s potent power figures. This means that the CR-V is the cheapest business choice, with lower-rate drivers having to shell out £1,305 a year to the Treasury.