Nissan's latest X-Trail picks up where the previous model left off, promising to be equally versatile, but roomier and better to drive 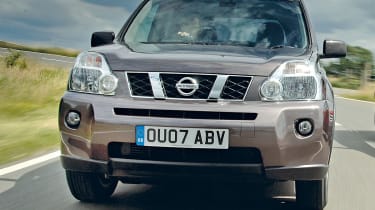 We got hold of one of the first new X-Trails in the UK for our test, but it hardly received a second glance. And that’s no big surprise; Nissan claims customers were so keen on the original’s no-nonsense looks, it decided against drastic changes.

The new car certainly has the same chunky appeal, but it now sits on a platform shared with the Qashqai. Every panel is different; look hard and you can spot the modifications. What’s more, the stretched D-pillars are an indication of a far bigger boot.

The 603-litre load area is 193 litres up on the old model, and it’s longer and wider than the Land Rover’s luggage space, too. A low load lip and wipe-clean trim add to the X-Trail’s practicality. The big boot comes courtesy of a long rear overhang – the wheelbase itself has grown by only 5mm. This means the previous generation’s adequate rear legroom has only improved fractionally, although the rear seats now fold 40/20/40.

Up front, the driving position is excellent, and there’s a decent range of steering wheel and seat movement. The old car’s knobbly fabrics and workmanlike dash materials gave a utilitarian feel, but this model is more upmarket.

There’s a better-quality finish on the dashboard and the layout is simple, while the X-Trail’s practical features remain. Owners get six cup-holders, a generous glovebox and a lidded dash-top cubby.

Another welcome trait carried over from the previous model is the light action of all the controls. The clutch is well weighted and the six-speed manual gearbox has a precise shift. The 2.0-litre dCi diesel engine has already been seen in the Qashqai, and even in lower-output 148bhp guise it delivers meaty performance.

The X-Trail weighs 1,711kg – that’s 59kg lighter than its rival – and this balances out the fact that its 320Nm torque output is 80Nm down on the Freelander’s. As a result, the Nissan feels just as responsive. It’s half-a-second quicker from 0-60mph, at 9.1 seconds, and outperformed the Land Rover in our in-gear tests. The auto box in the Freelander contributed to the performance gap, but despite a flat point around 2,000rpm, the Nissan’s dCi unit delivers its power smoothly.

Our noise meter picked up some diesel clatter in the middle of the rev range, yet on motorways, the engine is far more subdued. However, the X-Trail can’t match the Freelander’s premium feel, especially when it comes to the ride. There’s more vibration in town in the Nissan, while extra tyre roar disturbs motorway progress.

But this tighter dynamic set-up means the X-Trail has the edge on a twisty road. With sharp, positive steering and good body control, the Nissan is agile, balanced and car-like in its responses, whereas the Land Rover has a more ponderous feel to its dynamics.

The X-Trail’s All Mode 4x4i transmission allows you to select front-wheel drive only, which improves economy. Or you can switch the clearly labelled dial to Auto Mode, which adjusts drive between the axles. You can feel this when exiting corners; the unloaded front wheel doesn’t lose traction, as power is sent to the rear tyres instead.

As with the Land Rover, stability control is standard, and if you head off-road, hill descent control allows you to lock the 4WD to give the best set-up for mud-plugging. But it’s the X-Trail’s combination of practicality and value that makes it such a strong contender; a full-length sunroof, CD changer and Bluetooth phone connection are all included.

Price: £21,945Model tested: Nissan X-Trail 2.0 dCi SportChart position: 2WHY: With a fresh diesel and more space, the new X-Trail aims to carry on where the old model left off.

A return of 28.8mpg isn’t great, especially as it’s more than 10mpg short of Nissan’s official figure. However, our car had low miles, and should prove better once run-in.

Our experts have yet to work out resale figures for the new Nissan, but the previous car retained only 44.5 per cent of its value. While this will improve, it’s unlikely to top 50 per cent.

For £399, buyers of the old X-Trail could get a five-year, 70,000-mile servicing package. Even if the new car doesn’t have such an offer, it will still be far cheaper to maintain than the Land Rover.

The dCi is not only frugal, but also far cleaner than its rival, emitting 80g/km less CO2 than the Land Rover. That means a yearly saving of £1,927 for higher-rate tax payers.