Freelander is comfortable and refined, but comes at a price. 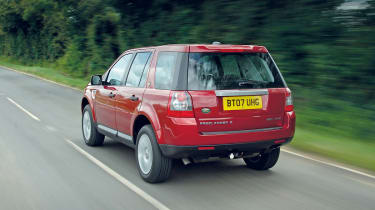 The original Freelander was on sale for nearly a decade, and by the end of its life, had become comprehensively outclassed by newer rivals. However, it was still a big seller, so the off-roader clearly has a loyal fan base.

It comes as no surprise, then, that Land Rover’s designers have retained the classic Freelander visuals with the latest model. As is the case with the new X-Trail, the second-generation Freelander looks familiar, and yet is more modern than its predecessor and has a chunkier profile.

Cleverly, the stylists have included details such as Range Rover Sport-inspired side gills, plus bulky door handles which echo those on the Discovery. The intention here is to link the newcomer with more exclusive products in the firm’s range which, it is hoped, will help offset its high price. The cheapest model in the line-up is the £20,935 S, and it’s only really this poorly kitted-out version and the £23,435 GS that fall within the X-Trail’s direct price band.

Our range-topping HSE matches the Nissan for equipment, but it costs a huge £30,960 – although once inside the cabin, there’s no doubt quality has taken a big step forward over the outgoing car. Discovery owners will recognise the multifunction steering wheel and the chunky switches and dials. Touchscreen sat-nav is standard, while the driving position is lofty and comfortable.

However, the Freelander can’t match the Nissan for interior space or practicality – for starters, there’s less cabin stowage, the rear doors are short and the back seats offer fractionally less legroom than the Nissan’s. More importantly, the Land Rover’s boot trails its rival’s by 200mm in length and 90mm in width, while a high lip makes loading difficult. So the Freelander won’t appeal to families as much, and is some way behind the class leaders in terms of versatility.

That could be because the designers have spent all their time working on refinement. The Land Rover scores very highly on this front, and from behind the wheel you get the same feeling of relaxed isolation as you do in the Discovery. The 2.2-litre TD4 diesel is quieter at idle than the Nissan’s powerplant, while good sound insulation means it’s hushed at speed, too.

Our test model was fitted with the optional CommandShift six-speed auto, but the excellent manual mode allows you to hold the car in each gear. At 400Nm, the Freelander has an 80Nm torque advantage over the Nissan, yet at the track, it was slower in all our tests, including the crucial 30-70mph sprint; it trailed the Nissan by 1.8 seconds, with a time of 10.6 seconds.

While the automatic gearbox has a smooth shift, in the real world it feels less responsive. And the Freelander is slower to react dynamically, too. It’s nose-heavy compared with the X-Trail, and the long travel suspension compresses much more under load, meaning greater roll in corners and dive under braking. It runs its front wider in bends and works its tyres harder as well.

Nevertheless, the supple suspension means the Land Rover rides comfortably. With few vibrations penetrating the cabin, it’s effortlessly composed and very relaxing to drive. Add this to the feeling of quality, and the Freelander comes across as belonging to the class above. The problem is, its high price means it nearly does.

Demand for the Freelander is still strong, and so it retains 52.6 per cent of its value. It costs a lot more than the Nissan, but you’ll get back £16,285 after three years.

You pay a lot to run a Freelander as a company car. A high list price and CO2 emissions of 270g/km mean that top-band payers shell out £4,334 annually.