SEAT's Altea XL people carrier has evolved into a vehicle that is more versatile and aesthetically appealing. 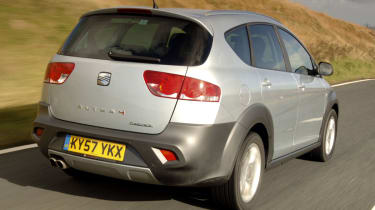 Half people carrier and half off-roader, the latest SEAT has been designed with leisure pursuits and the great outdoors in mind. But that doesn’t mean the styling has been ignored, as it boasts the distinctive and sporty looks that have become a trademark for the Spanish brand.

In fact, we think the Freetrack 4 is a more attractive design than the Altea XL on which it’s based. At the front, it shares the same nose as the Leon and Altea. But what sets it apart are the tough-looking body enhancements and wheelarches, along with an extra 40mm in ride height and the unique 17-inch alloy wheels.

It’s not totally successful – we’re not keen on the abrupt way in which the front bumper meets the bonnet either side of the grille. However, thanks to the chunky rear, it doesn’t appear as ungainly as the XL. It’s far more aggressive and rugged than the Scenic Conquest, and looks good in the Luna Grey finish of our test car, too. Brighter paintwork tends not to suit it as well.

It’s clearly an off-roader, though, and to accommodate the four-wheel-drive system, the rear axle and suspension have been adapted, while the fuel tank has been reshaped and repositioned. The knock-on effect is that, with the seats in place, the load area is 42 litres smaller than the Altea XL’s, at 490 litres – although it’s still larger than the Renault’s.

As in the Scenic, the rear seats slide forward to increase luggage space. But while legroom is better in the Freetrack, it’s still a bit of a squeeze with three adults in the back as the middle seat is narrow. It’s not as comfortable as the two outer rear chairs.

Still, the rest of the seats offer good support, while the cabin is well built and the driving position excellent. Features such as the three-spoke steering wheel give a sporty feel, and that’s even more evident on the move. Even though it rides higher than the Altea XL, this car rarely drives like an off-roader. Firm suspension ensures it corners precisely, too, with body roll kept well in check. There is lots of grip, and overall it’s more composed than the Scenic, particularly on twisting roads.

The SEAT is surprisingly capable in the rough as well. Although it won’t match a true SUV, it deals with slippery surfaces and rutted inclines well. The Haldex four-wheel-drive system is electronic, which means there’s no manual control. When it cuts in, up to 50 per cent of the drive can be directed to the rear wheels.

In normal conditions, all the power is transferred to the front tyres, and thanks to the punchy 168bhp 2.0-litre TDI engine, the Freetrack is no slouch. It covered the sprint from 0-60mph in only 8.5 seconds, which is faster than the 10-second time recorded by the Renault. The powerplant, which is also used in the Leon and Altea FR, isn’t the last word in refinement – in fact, it’s quite coarse – but it provides great in-gear performance.

While the power delivery is rather sudden, and vibration is noticeable through the clutch pedal, the Freetrack is excellent on the motorway. There is a little more road noise than is evident in the Renault, but you’ll rarely need to change gear.

A price tag of £21,395 leaves the SEAT looking expensive – that represents a premium of £2,260 over the Scenic. However, the Freetrack 4 does come very well equipped as standard, with rain-sensing wipers, climate control, part-leather seats and folding mirrors included. These are all optional extras on the Renault.

A more powerful engine, heavier kerbweight and the on-demand 4WD system all count against the Freetrack. It proved the least economical of this pair, returning 35.3mpg with us.

This market has yet to catch on with used buyers, as neither car has great residuals. But the SEAT is way ahead of the Renault, keeping 38.3 per cent of its value over three years.

Costs have yet to be released for the Freetrack 4. The Altea XL TDI uses the same engine, and three checks total £640. We’d expect the Freetrack’s bill to be higher due to the 4WD system.

the SEAT emits 19g/km more CO2 than the Scenic, at 179g/km. Add the Freetrack’s higher list price, and it’s an expensive business choice, with lower-band owners paying a hefty £1,177.