Scenic Conquest aims to appeal to buyers wanting more rugged looks and ability. Does it deliver? 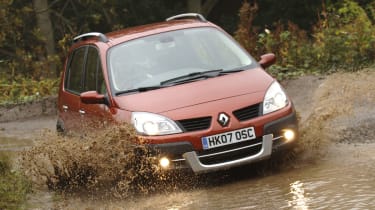 According to the advertising campaign Renault is using to promote the new Scenic Conquest, ‘it’s a city-country thing’. Bosses claim it is equally at home tackling high kerbs and potholes as it is muddy country tracks.

The differences over the standard people carrier aren’t immediately obvious, though. The plastic bumpers and rubbing strips, which are normally colour-coded, are now black, leaving the Conquest looking a little like the pre-facelifted Scenic. But details such as the cladded wheelarches, chrome-effect skid plates and roof rails do help it stand out.

With a modest 20mm increase in the ride height, it’s unlikely to impress owners who have tricky terrain to contend with on a regular basis. Yet it certainly suits the urban jungle image.

While it’s shorter than the Altea Freetrack 4, the Conquest has a 100mm longer wheelbase, which is evident in terms of overall luggage space. With all the seats out of the way, it offers a huge capacity of 1,840 litres – over 250 litres more than the SEAT. Freeing up all this room couldn’t be easier, as the three rear chairs fold and tumble individually, or can be taken out completely.

Rear passenger space isn’t as generous, with 700mm of legroom in the Renault compared to 760mm in the SEAT. But neat touches make up for this; as with the Freetrack, it has side window blinds and tray tables, plus there are underfloor cubbyholes and a central stowage unit.

The driving environment has an airy feel, and the design is stylish. It’s virtually identical to that of the standard Scenic, apart from the contour line-style graphics on the centre console and the coloured stitching.

It’s comfortable, too, and this is reflected in the Renault’s excellent road manners. While the chassis and suspension have been modified to improve comfort over rough terrain, ride quality on tarmac also benefits; the car is even smoother than the standard model. This means it’s an incredibly effortless and relaxing cruiser.

However, body roll isn’t as well controlled as in the Freetrack, and while the Scenic turns in neatly, it doesn’t feel as poised as its rival. The electronic power-steering isn’t great, either – it seems over-assisted and lacks feedback. What’s more, the Renault can’t match the SEAT off-road, with only front-wheel drive and limited ground clearance.

There are no gripes with the 1.9 dCi engine, though. It’s much more refined than the SEAT unit, and while its 128bhp and 300Nm outputs mean a 40bhp and 50Nm deficit, it’s still punchy and responsive. On the move, it’s quieter and never feels strained, even under load.

At the test track, the Conquest completed the 0-60mph sprint in 10.0 seconds. While that isn’t as quick as the Freetrack, it’s respectable, and performance is good across the board. Stopping distances were similar to its rival’s – the car took 36.3 metres to come to a halt from 60mph – but it isn’t as composed under heavy braking, plus the pedal doesn’t provide sufficient feel.

The Scenic Conquest is the cheaper model in this test, at £19,135. And even with all the options fitted to our test car, it costs less than the SEAT. The trouble is, the Renault’s limited off-road ability makes it an expensive alternative to a conventional people carrier.

Price: £19,135Model tested: Renault Scenic Conquest 1.9 dCiChart position: 2WHY: One of our favourite compact MPVs. But how will the Scenic fare in more off-road-oriented guise?

With its smaller powerplant and front-wheel drive, the Scenic was always going to be more frugal. It achieved a decent 40.1mpg, which means a range of 529 miles.

Scenic buyers pay £653 for three services. But the Renault network came 30th out of 32 in our Driver Power 2007 dealer survey. SEAT finished 27th.

Thanks to a lower CO2 output, at 160g/km, the Renault sits three tax brackets below the SEAT. It’s also cheaper to buy, so lower-band fleet users shell out £926 annually.