A cross between the Touareg and Golf, can this SUV take top honours? 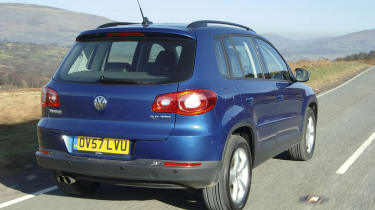 The first indication that Volkswagen was  planning to build a compact SUV was when it revealed the Concept A design study at the 2006 Geneva Motor Show. The firm claimed this wacky two-door off-road coupé previewed the look of its forthcoming baby 4x4. But now that the Tiguan has arrived, it’s hard to see much similarity between the two.

The five-door is a generic VW design, with  a Golf-style grille and lights added to a squared-off body. As with other models in the firm’s  line-up, the new 4x4 comes across as a solid offering, but there’s nothing which really  excites. It’s neither rugged nor individual.

It doesn’t help that our test car was the Escape variant which, in order to improve off-road ground clearance, has no lower airdam at the front. In  its place there’s a sloping scuff guard, which gives the nose a strange, boat-like appearance.

Unsurprisingly, road-biased trims are expected to be more popular, as the compact SUV market is more about catering for families than charging through mud. However, the Tiguan feels robust enough to deal with some off-road use.

Arguably it fares better in that regard than as  a load-lugger, because the Tiguan isn’t a big  car. It’s shorter and narrower than Honda’s CR-V, while the small back windows and minimal rear overhang hint at a lack of boot space. Open  the tailgate, and you’re greeted by a high floor and only 395 litres of space – more than 150 litres less than either Japanese rival.

Rear seat room also falls short of the Honda’s, but the Tiguan’s small proportions help to make it easy to drive. All-round visibility is excellent, and although you don’t sit nearly as high as in the Antara, the VW is far better built and laid out. Clear controls, comfortable chairs and a wide  range of seat and wheel adjustment ensure  that the Tiguan is easy to get on with.

An electric parking brake is standard, which creates more stowage space on the centre console. Add this to three cubbies in the dash, plus deep door pockets, and the driving environment scores well for practicality.

On the road, the Tiguan is similar to other  Golf-based models – the pedals and gearlever are accurate and perfectly weighted, while the handling is reassuring and precise.

With sharper steering, better body control and more grip than its rivals, the VW is the most capable on country roads and, unlike many off-roaders, it’s never cumbersome around town.

The ride is firm, but with such absorbent damping, the Tiguan is rarely crashy over rough surfaces and remains composed at speed. Traction is excellent, too, as the 4MOTION system varies torque between the axles for maximum grip.

The Tiguan is the first VW to get the firm’s  all-new common rail 2.0-litre TDI engine. It’s punchier and quieter than its predecessor, but it’s not as silky or as well insulated here as it  was in the identically powered Audi A4 that we  tested in Issue 1,000. More importantly, it  can’t match the Honda’s unit for refinement  or performance. Still, power delivery is linear, even if it’s slow to respond at low speeds.

On price, the VW is closely matched to the competition here. Our test car was loaded with options, but standard equipment is generous, including climate control, curtain airbags and a folding front passenger seat, while Escape-trim models also get hill descent control.

Price: £22,050Model tested: Tiguan 2.0 TDi EscapeChart position: 2WHY: According to VW, the Tiguan combines the best elements of the Touareg and Golf in a small shape.

For a new engine, the VW’s average return of 29.5mpg isn’t good. A high drag factor takes its toll, with the Tiguan’s official figures lagging well behind those of the Honda.

One thing that is guaranteed to tempt private buyers is good residuals. And a value of 58.1 per cent for the Tiguan is one of the best we’ve seen for a compact SUV.

ALTHOUGH the Tiguan features VW’s all-new 2.0 TDI unit, its 189g/km of CO2 is higher than the CR-V’s and RAV4’s. This makes it the most expensive company car here.