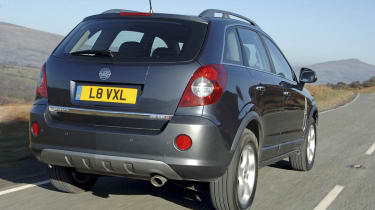 As with Volkswagen, Vauxhall missed out on the boom years of the compact SUV class. When the hopelessly  outdated Frontera was withdrawn in 2003, the firm didn’t have anything to replace  it and take on the CR-V and RAV4.

However, last year the Korean-built Antara signalled the firm’s return to the sector. The model shares much with the seven-seat Chevrolet Captiva, and the five-seater  Antara is bigger than its rivals here.

Its styling is well executed, with everything in perfect proportion. As well as unique Vauxhall detailing to distinguish it from the Chevrolet, it’s more modern than the RAV4 and less fussy  than the CR-V, and has an upmarket air.

Unfortunately, the cabin doesn’t live up to the exterior’s executive ambience. The conventional design avoids the bold shapes and funky packaging of the Honda and Toyota, although it isn’t as modern or well built as the Tiguan. The quality of the materials is fine in upper sections of the dash, but you get the impression that the cabin is a little compromised because it has to share its structure with the Captiva.

There are no cup-holders, and storage space is limited to a cubby in the centre console that uses the space freed up by the pistol-grip handbrake. While rear passengers benefit from decent legroom, the Antara is the only model on this test which doesn’t have sliding rear chairs. The backs split 60:40, though, creating a usefully flat load bay. Yet with the seats upright, the 370-litre capacity is the smallest here, and no better than many hatchbacks, despite the big exterior dimensions.

The driving position isn’t perfect, either. You  do get a lofty perch, but there’s none of the  sense of space around the driver which the Honda and VW create. The steering wheel is so huge it could be more suited to a truck which, unfortunately, gives an unwelcome clue to what’s in store. Feedback is disconcertingly vague, and there’s a delay between turning  the wheel and anything happening.

On uneven surfaces, the Vauxhall bounces on its dampers rather than absorbs bumps, and this lack of suspension control is unnerving. The body rolls alarmingly in bends and relies heavily on the stability control to keep composed when cornering hard. The soft suspension does at  least mean the Vauxhall is comfortable on the motorway, but as a whole the Antara feels woefully under-developed. Some of the mechanicals are equally disappointing, too.

The brakes are spongy and the ABS is over-sensitive. As a result, the heavy Antara took  52.9 metres to come to a stop from 70mph –  5.3 metres longer than the Tiguan. The sloppy five-speed gearbox is dreadful, too, and despite short ratios, it doesn’t help performance.

On a more positive note, the 2.0-litre Vauxhall engine pulls well from 1,700rpm and remains relatively refined under load. But with a kerbweight of 1,801kg, it’s nearly a quarter of a tonne heavier than the VW or Toyota. That means acceleration and in-gear punch are muted, while fuel economy isn’t a strong point, either. And with a price tag of £22,620, the Antara S is  the priciest car here, yet it doesn’t have any  more standard kit than its rivals.

Although it was only launched last year,  the Vauxhall simply doesn’t seem that modern,  and is arguably old before its time.

Price: £22,620Model tested: Antara 2.0 CDTI SChart position: 4WHY: The Antara is the biggest car here, and a huge leap forward from its Frontera predecessor.

With the heaviest kerbweight and a poor 0.38Cd drag factor, it’s no surprise the Vauxhall was the least frugal. We returned only 29.0mpg, with a 415-mile range.

Depreciation is a concern for Vauxhall owners. A retained value of 46.9 per cent means that the Antara is the only car here that doesn’t break the 50 per cent mark.

VISITS are only required every 20,000 miles, and £540 for the first three checks is reasonable. Of the four, the Antara should be the cheapest to maintain.

If anything will dissuade buyers from the Antara, it’s the 197g/km of CO2, putting it in the 29 per cent bracket. Bills are £600 higher than both the Honda’s and Toyota’s.