The sporty compact SUV is the cheapest car here, but loaded with kit 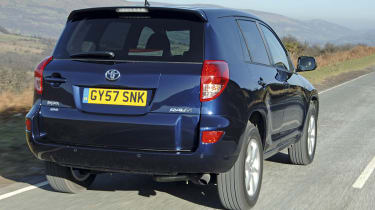 The RAV4 can rightly claim to be the model that created the sporty compact SUV segment. Toyota has sold more than two million examples worldwide over three generations, but newer and sharper rivals have stolen the limelight, and the model is fast becoming the forgotten car of the class.

However, it’s still a natural rival for the Tiguan. Of the opponents lined up here, its dimensions are closest to the VW’s, and it shares the German car’s sense of solidity. This XT-R model has chromed grille bars and an under-bumper protection plate, but the RAV4’s styling, which is an evolution of previous models, isn’t as modern as the Honda’s, for example.

The interior fares better, as it’s well built and hard to fault. Silver plastic trim brightens the centre console, and the two-tier layout is straightforward, with easy-to-use radio and climate control buttons.

Unlike the other cars here, the RAV4’s handbrake and gearlever are in a conventional position next to the driver. There isn’t as much seat and wheel adjustment as in the Tiguan, but there’s still a decent sense of space behind the wheel.

In the back, the seats split 60:40 and slide back and forth, which is just as well, because the Toyota has the shortest wheelbase here and offers the least legroom. Crucially, though, there’s a flat transmission tunnel, so the middle seat is more accommodating than the VW’s.

Handy ‘pull-and-drop’ one-touch levers in the boot and on the seat backs fold the rear chairs flat in one action, but even with the seats in place, the Toyota has the biggest boot capacity on test. On the downside, the side-hinged rear door is awkward to use if there are cars parked behind, and the boot is cheaply trimmed.

However, the RAV4 was always supposed to be a compact 4x4 that traded on its sense of fun rather than outright practicality. It has a reputation as the one of the most driver-oriented SUVs, which you might find surprising, considering so few of the firm’s other models have a reputation for delivering much in the way of excitement.

Nevertheless, the current RAV4 maintains the appeal of its predecessors. The handling isn’t quite as car-like as the VW’s and it’s not brimming with feedback, but body lean is well controlled and the steering is sharp and direct, while the RAV4 is agile and inspires confidence.

Sadly, it’s rather less accomplished on the motorway, where the firmly sprung chassis doesn’t settle into a relaxed stride as easily as the Honda. The Toyota’s suspension fidgets over imperfections, and you’re more aware of bumps than you are in the Tiguan.

At 310Nm, the RAV4’s 2.2-litre diesel has the lowest torque output here, and at 11 seconds it’s the slowest from 0-60mph. Throttle response is lazy compared with the CR-V, but the slick six-speed gearbox and light clutch are easy to use. However, the D-4D unit simply doesn’t have the punch of its rivals on this test.

The RAV4 is the cheapest car here, though, and this XT-R trim comes with lots of standard equipment. A driver’s knee airbag, parking sensors, heated folding door mirrors, an electric sunroof, six-disc CD changer, Bluetooth phone connection and cruise control are all included. Can this lengthy kit list help to propel the Toyota to the top spot?

Price: £21,245Model tested: RAV4 2.2 D-4D XT-RChart position: 3WHY: The RAV4 is famous for its on-road abilities, while this mid-spec XT-R model was launched in January.

IN managing to top 35mpg, the Toyota did well, giving it a range of more than 460 miles. A low drag factor and the light kerbweight are a match for many saloons.

The firm shares a reputation for reliability with VW, and the RAV4 is predicted to retain 50.5 per cent. But that’s still a loss of £10,600 over three years.

Toyota’s quoted price of £543 for the first three services is low. But with 10,000-mile intervals, the RAV4 will need attention much sooner than its rivals.

Thanks to the lowest list price and emissions in the 24 per cent bracket, the RAV4 is the cheapest company choice. And like the CR-V, your tax disc will cost you £165.