While many Japanese motor manufacturers deliberately pen models to look ‘more European’, the designers at Mazda wanted a futuristic style 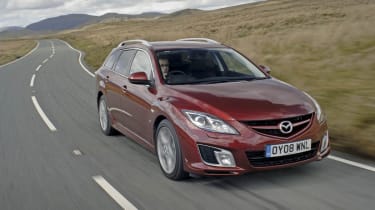 While many Japanese motor manufacturers deliberately pen models to look ‘more European’, the designers at Mazda wanted a futuristic style. That has seen the company’s cars grow sportier and bolder in recent years.

The 6 continues this trend, and is stylish, athletic and well proportioned. There’s even a hint of Mazda’s RX-8 coupé in the prominent front wheelarches.

It’s a good-looking estate which adds chrome roof rails and a sharply tapering rear end to the already stylish lines of the hatch. Our Sport model gets side skirts, darkened rear glass and a more aggressive front bumper.

The load-lugger is only 30mm longer than the five-door, and sits on an unaltered wheelbase. Yet it scores well for practicality – we’re impressed that designers were able to give the car such a low load lip and wide boot opening without compromising on the rear end’s shapely appearance.

It’s the way the seats fold flat that makes the Mazda so clever, though. You simply pull one lever, and the rear seatbase lowers with the back dropping flat on top of it in one motion. This mechanism – called KaraKuri – is also offered in the hatch, but it really comes into its own in the estate. Up front, the 6 can’t match the Passat’s quality, but the dash is simple and smart. The deep-set instrument dials and three-spoke steering wheel echo Mazda sports cars, and not only is the driving position excellent, the controls are well weighted and logically placed, too. In short, the 6 is easy to get on with.

On the move, you feel at one with the Mazda, as it’s tauter and more fun than the Passat. The steering is sharp – the car turns in with precision – and there’s lots of grip and superb agility in corners. It’s composed and reassuring at speed, while the package is completed by a snappy gearshift and crisp controls.

As well as maintaining the 6’s entertaining driving experience, the engineers were charged with improving refinement on the new car. And they have been largely successful. Although the Passat remains the smoother model, the Mazda strikes a pleasant balance between sporty and comfortable. Only over really rough surfaces do imperfections enter the cabin, although at motorway speeds road noise is more of an issue in the 6.

The 2.0-litre diesel is noisier than the VW unit, too. At idle it’s gruff, and read 50dB on our meter – 4dB louder than the Passat.

Things improve once you’re on the move. In terms of performance, the two cars are closely matched. The 6 sprinted from 0-60mph in 9.3 seconds, but doesn’t have quite such a punchy or flexible mid-range. Crucially, the Mazda also has lower emissions, for cheaper company and road tax.

In fact, the 6 is great value all-round. At £21,030, it costs £1,035 less than the VW, but adds xenon headlights, heated seats, cruise control, a CD changer and Bluetooth hands-free as standard. Add stronger residual values, and it’s a real contender.

Price: £21,030Model tested: Mazda 6 2.0D Sport EstateChart position: 1WHY: New 6 Estate is bigger and smarter than before, as well as cleaner and more economical.

Even though these two cars have identical power outputs, the 6 proved the more frugal choice. It returned 40.2mpg in our hands, and gave a range of 566 miles.

The Mazda is the safest place for your money. Not only is it cheaper to buy, it will be worth more than the Passat after three years. Our experts predict a retained value of 45.4 per cent.