The Passat is now in its sixth generation, and the estate version is a byword for quality and robust engineering. 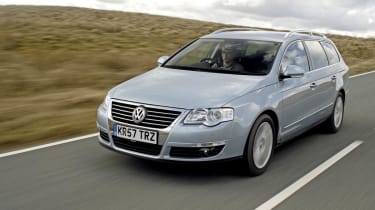 The Passat is now in its sixth generation, and the estate version is a byword for quality and robust engineering. It sets the class benchmark for image, and is a strong challenger – even though it’s neither as sporty or modern-looking as the new 6.

At the rear, the circular LED tail-lights are an attractive touch, but the VW badge doesn’t double as the tailgate release as it does on the saloon. And while the boot itself is reasonably practical, its load lip is 70mm higher and the width of the opening 100mm narrower than in the Mazda, which puts the Passat at an instant disadvantage.

In terms of capacity, there’s not much between these cars. With the seats in place, the VW offers 513 litres of space – six litres less than the 6. But what’s crucial is that the gap between the rear wheelarches is 130mm narrower in the Passat.

Further taking the edge off the package is the seat folding mechanism. VW favours a traditional set-up, rather than a user-friendly modern layout similar to the Mazda’s. So you tumble the bases against the front seats and fold the backs down. While this frees up a completely flat surface, the tumbled squabs hamper maximum load length.

The Passat’s flatter roofline goes some way to compensating – it means the load area is 20mm taller than that in the curvier 6. But this can’t stop the VW trailing behind its rival here in terms of maximum capacity – with the seats down, its 1,641-litre load area is 113 litres short of the 6’s.

Things turn back in the German car’s favour up front. The cockpit provides plenty of storage, with big door pockets and a deep central cubby. There is also a wide range of seat and steering wheel adjustment, giving an excellent driving position, while sculpted doors increase elbow clearance.

The cabin wraps around the driver, and the attention to detail throughout is impressive. All the controls are logically placed and work with precision. The handy central display between the dials is particularly useful, and while the Passat is more sombre than the sporty 6, the upmarket feel to the interior is unrivalled.

This distinction between the cars carries over to the driving experience – the VW just isn’t as exciting or involving as the Mazda. Its chassis lacks sparkle, the suspension doesn’t have the control of the 6’s and the handling isn’t as nimble. The gearbox, brakes and steering can’t match the immediacy of the Japanese model’s, either.

But it’s more comfortable on the motorway, and the suspension does a good job of soaking up bumps. And while it’s certainly not as agile, the VW always remains composed and safe.

Performance is closely matched. The 2.0-litre TDI is about to be replaced by a new common-rail diesel, yet even in this guise the VW engine is more refined at low speed. It delivers its power in a sudden gust and then tails off, but there’s less vibration through the pedals than in the Mazda – although how much of this is due to the superb cabin insulation is difficult to judge. What is certain is that the Passat has executive car levels of road, wind and engine noise suppression.

This premium feel comes at a price. In Sport trim, the VW is £1,035 more than the Mazda, and isn’t as well equipped as standard. It also has higher emissions and running costs.

With its variable service intervals, the Passat should go much further than the 6 between checks. Three visits cost £468, but VW came 23rd out of 30 in the Driver Power 2008 poll.