Newcomer combines the essence of its predecessor with a modern twist 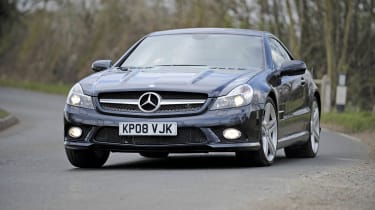 Classy, desirable and superbly refined  – the Mercedes SL is the best-selling upmarket roadster of all-time. However, in terms of showroom success, the  two-seater’s best days are behind it. Ever since sales peaked in 2003, they’ve been on a gentle decline. The 2006 facelift slowed the slide, but  in order to get back on the rise, Mercedes has made some substantial changes.

However, is this really the new-generation model the firm claims? Sure, it now has a one-bar grille, SLR-style side vents and bonnet bulges, all of which add visual aggression. Yet step back and you’ll see the proportions have barely changed, least of all the height and wheelbase. The platform hasn’t been updated either. Radical it isn’t: in fact, we’d argue that the styling, although more modern, is less elegant than that of its predecessor.

That’s not to say the SL has gone downmarket. The roof mechanism remains a sight to behold: pull back the lever on the centre console and, as 11 hydraulic cylinders whirr into action, the three-part top artistically hides itself away with the minimum of fuss. In comparison, the Jag’s mechanism looks cheap and dated.

Overall, it seems Mercedes has spent far more on engineering than its rival. There’s the new Airscarf, overhauled COMAND system, seatbelts integrated into the seats and the fact that, even when the top is lowered, accessing the boot is easy, thanks to electric motors that raise the folded lid.

Don’t think the SL is flawless, though. A mesh wind deflector which distorts rear visibility really isn’t good enough on a £78,000 car, and the cabin design is disappointingly similar to before. The ergonomics are fine – the low-slung driving position is excellent – but the tacky silver trim is out of place. Neither does the button-heavy dash have the clarity and simplicity of the XKR’s layout.

When it comes to speed, though, the two cars are evenly matched. At 1,910kg, the SL carries an extra 195kg and, with 388bhp and 530Nm, it gives away 22bhp and 30Nm, yet this pair were separated by fractions of a second in all of our acceleration tests. The SL500’s 5.5-litre V8 doesn’t quite have the low-down urge of the Jaguar’s supercharged unit, but it’s smooth  and refined. Combine this with a linear power delivery, and the Merc is deceptively fast, aided by the slick-shifting seven-speed gearbox.

Relaxed yet muscular, the V8 is extremely well suited to the SL. This is a roadster that’s able to play sporting or laid-back roles with ease. As a cruiser it excels on smooth roads, soaking up the miles. On more testing tarmac, although the body feels a fraction tauter than the outgoing SL’s, it’s not much quieter or stiffer than the Jaguar.

Chassis shudders are quickly absorbed, yet the glass-panelled roof reflects noise around the cabin rather than absorbing it, so there was little to choose between the two in our sound tests.  Top-down, there’s no denying the Merc’s cockpit suffers from less buffeting, though.

Revisions to the suspension mean the SL is more nimble and precise than its predecessor. But although it’s pleasantly quick cross-country, the Merc isn’t a responsive sports car – it far  prefers to take things easy and cruise along.

Despite the new face and minor improvements, Mercedes hasn’t tampered with the SL’s great recipe – but is the fresh model distinctive  enough to attract new buyers to the brand?

Price: £77,785Model tested: Mercedes SL500Chart position: 2WHY: With an amazing folding roof and top-quality engineering, the SL is highly desirable.

An average of 24mpg is possible if you drive gently (the Jag struggled to top 21mpg). But in our tests, the SL achieved 19.4mpg. Still, a large 80-litre tank means a superb 341-mile range.

While the SL had great residuals at its launch in 2001, these have now softened to 44 per cent. Despite the revisions to the new roadster, it’s difficult to see the car matching the XKR’s figures.

Both these cars are expensive to run, with the SL slightly cheaper at 184.4 pence per mile. Higher-rate business users will face an annual tax bill of £10,890 if they choose the Merc.