The big cat is still sleek, but are good looks enough to claim victory? 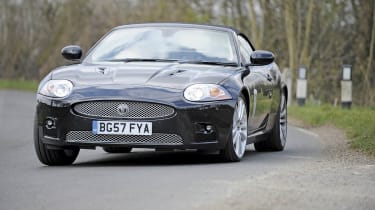 The XF saloon is currently more  important in terms of sales and  mainstream impact, yet it was the  XK coupé that proved Jaguar could  produce a model to beat the world’s best – it  was Auto Express Car of the Year in 2006.

Winning that award calls for far more than  simply good looks, but there’s no denying the styling is the first thing that strikes you about  the XK. We don’t think the drop-top is quite  as elegant as the coupé, which has a longer  roofline and sleeker profile, but the meaty rear haunches help to give it some attitude. However, as with the Merc, the Jag is undoubtedly at its best with the top dropped.

Stowing the roof takes slightly less time than in the SL, although the operation isn’t nearly  so entertaining to view – it’s largely the same mechanism as in a traditional convertible, with  the fabric folding away beneath a solid panel.  The end result is clean and tidy.

But the sleek styling can’t hide the fact that the XKR is a big car – in fact, at 4,791mm it’s more than 200mm longer than the SL, as well as being taller and significantly wider. The extra size has allowed Jaguar to sneak in a couple of rear seats complete with Isofix mountings. However, they are so cramped that few child boosters will  actually fit in, let alone the kids themselves. The boot is more accommodating, but the high floor means you will struggle to get in bulky loads.

The best part of the convertible’s interior is undoubtedly the driving environment. Beautifully constructed and attractive, it is much more cosy and welcoming than the Mercedes’ slightly  austere cabin. OK, so the matt-finished wood looks like laminate flooring, but with fewer  buttons (thanks to the touchscreen system)  the layout is clearer, simpler and more elegant.

There are niggles, though. Our car’s cream dash reflected badly in the windscreen, the positioning of the roof buttons on the header rail is awkward, plus the thick fabric top and slim back window mean rear visibility is poorer than in the SL. But we’d encourage you to lower the hood whenever possible so you can relish the V8 exhaust note. This is a great car to enjoy in the confines of a tunnel…

With the roof up, it’s the whining supercharger that’s most audible, while the XKR’s ability to accelerate is jaw-dropping. Although torque doesn’t peak until 4,000rpm, the Jag feels  strong from below 2,000rpm, while the six- speed gearbox features paddles behind the wheel and delivers silky shifts.

In fact, everything about the Jaguar is smooth. For starters it’s effortlessly easy to drive and lighter on the road than the SL, with purer responses and a fabulously composed ride. The CATS adaptive dampers not only keep the body stable, but also absorb lumps and bumps – all the more amazing when you consider this car rides on 20-inch wheels with super-low-profile tyres.

The Jaguar’s body itself is susceptible to shake, although this is by no means excessive. You can’t escape from the fact that the XKR is  a big, wide car to drive along country roads. Nevertheless, it’s just as agile as the SL, and has the uncanny ability to match the driver’s mood. It is happy to charge round corners, or simply relax.

The XKR is also extremely well equipped – but without the Merc’s folding metal roof and sheer depth of engineering, we’re not convinced it  can justify the £76,995 asking price.

A smaller tank and inferior economy mean you’ll fill up more often in the Jag. Over a year, though, fuel bills will only be about £100 more than those for the SL.

Even though a resale value of 59.3 per cent sounds fantastic, the XKR loses over £31,000 in three years. Unusually, the soft-top does not fare quite as well as the coupé.

Customer care is great at Jag; its dealers were fourth in Driver Power. Just as well, as the XKR is serviced every 10,000 miles compared to about 15,000 for the SL’s variable schedule.