Flagship estate sharpens up thanks to hi-tech four-wheel steering 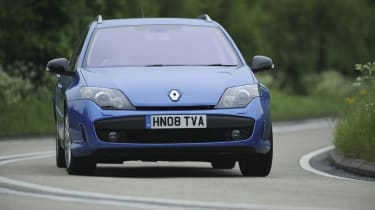 Could do better. That has been the widely accepted view of Renault’s latest Laguna, but can some clever chassis tweaks and a bodykit reverse the French model’s fortunes? In ordinary trim, the Renault lags behind the class leaders, but with tweaked styling and four-wheel steering, the GT is a very different proposition.

The flagship has been given its own identity with a raft of well judged changes. Multispoke 18-inch alloys are the most obvious addition, but there’s also a new front bumper with a larger air intake. Fresh headlamps feature a black background and the rear light clusters have smoked lenses. There’s even a lower back bumper, which is punctuated by a pair of chrome exhaust pipes.

These details all help to remedy the Laguna’s awkward looks, but the biggest improvement comes from choosing the Sport Tourer body. The load-lugger is a major step forward over the hatch version. Its sloping roofline and tapered tailgate provide the family model with a sleek and purposeful appearance – unlike the boxy Verso.

Inside, the Laguna’s cabin is classy, with soft-touch plastics on the dashboard and a slick design. The GT has racy additions such as a smart alloy gearlever, matching pedals and a set of grippy sports seats. As a result, it trumps the Toyota’s angular cabin and it also feels well screwed together, although the light grey seat upholstery doesn’t look as if it will stand up to much abuse.

Climb aboard, and there’s plenty of adjustment on the driver’s seat and steering wheel, making it easy to find a comfortable position. Rear space is competitive, with lots of headroom in the back and a 501-litre boot. Folding the rear seats bumps that up to 1,593 litres, and collapsing the chairs couldn’t be simpler – just pull a lever on the side of the load bay and let gravity do the rest.

With the practical concerns taken care of, it’s time to focus on what makes the GT unique – its new ActiveDrive chassis. Renault’s four-wheel-steering set-up uses electronics to constantly calculate the level of steering input required by the rear axle. At low speeds, the system is tuned to aid manoeuvrability, so the rear wheels turn in the opposite direction to the fronts. Above 38mph, stability is the aim of the game, so they steer in the same direction. The maximum angle they move is only three degrees, so you can’t see it from the outside, but you can definitely feel its effects.

The turning circle of 10.8 metres is the same as the Clio supermini’s, and corners don’t require as much steering lock as in the Toyota. There’s also less drama and body roll than in the Verso. The GT can certainly carry more speed through a series of bends than the standard car, but the enjoyment in doing so hasn’t increased. That’s because the steering is still numb, with an artificial feel – albeit with less kickback over mid-corner bumps.

The 2.0 dCi diesel is unique to the GT. It’s the same unit used elsewhere in the line-up, but tuned to deliver 177bhp, instead of 172bhp. The turbodiesel is smooth and refined at motorway speeds, yet feels livelier than the 2.2-litre unit in the Verso. The Laguna takes 8.8 seconds to go from 0-60mph, nearly a second faster than the Toyota in our test. Renault has also tweaked the flagship’s suspension, and the end result strikes a fine balance between comfort and handling.

So while the Renault has a firmer set-up than the Toyota, it isn’t compromised as family transport. Can the T180 pull off a similar trick?

Paying the price for its impressive 400Nm of torque and 177bhp, the Renault was disappointing at the pumps. Its 27.8mpg would probably improve in regular daily use, but it’s still poor.

Our experts have yet to calculate residuals for the Laguna, but used car bible CAP Forecast expects it to be worth just 31 per cent of its new price after three years and 60,000 miles, at £6,873.

Renault dealers came last out of 30 in our Driver Power 2008 poll. The Laguna costs more to maintain over three years at £700, but its 18,000-mile intervals are a bonus.

Emissions of 177g/km are only 1g/km below its rival, and there’s little difference in company car tax bills as a result. Both cars also face a £170 annual road tax charge.