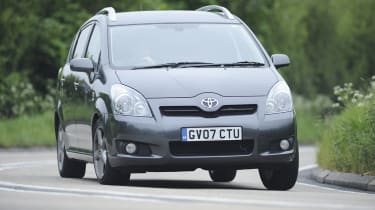 A sporty Toyota Verso sounds like it could be a contradiction in terms, but nestling deep in the price lists lies a version of the compact MPV with some serious performance potential. The model was launched as the Corolla Verso in 2005 (the Corolla part of the name was ditched with the launch of the Auris), but it’s only with Toyota’s 2.2-litre diesel under the bonnet that it has what it takes to stand out from the crowd.

Even with some subtle body tweaks, the Verso is fighting a losing battle against the Laguna when it comes to styling, because it’s impossible to ignore its boxy shape. The third row of seats demands an extended roof and tall body, and while the T180’s five-spoke alloys and silver roof rails look smart, they can’t help disguise its MPV profile.

It’s a similar story inside. The angular design of the Verso’s dashboard isn’t as easy on the eye as the swoopy Renault’s, and the hard plastics are of a lower quality. As you would expect, the fit and finish are solid, but the cabin lags behind the Laguna’s when it comes to equipment. Rear parking sensors are standard on the Renault yet a £495 extra on the Verso, and the French car also features part-leather upholstery and keyless entry and starting as standard.

However, Toyota’s compact MPV hits back with a third row of seats that fold into the boot floor. They’re a real bonus for large families, but load space is severely restricted if you need to use them, with only 63 litres available when all seven are in use. Legroom is tight in the rearmost row, too, so you should only regard them as occasional seats for children. Fold the second and third rows flat, and the Verso offers a vast van-like load space. But while its 1,563-litre capacity is good, the longer Sport Tourer beats it with an impressive 1,593 litres.

Climb into the front of the Verso, and the commanding driving position is excellent. The Toyota gives great visibility, and it’s easy to get comfortable, too. However, the Verso doesn’t feel particularly exciting.

One concession is the addition of a starter button, but as with the Renault, this is tucked away behind the steering wheel and not visible from the driver’s seat. Press it, and the 2.2-litre diesel makes no secret of which pump it prefers at the forecourt. The D-4D unit isn’t as muted as the Renault’s at cruising speeds, and while it produces decent pulling power from as low as 2,000rpm, the people carrier can’t match the Laguna for pace. Toyota quotes an identical 0-60mph time to the Laguna of 8.8 seconds, but on a damp test track, we could only achieve a best of 9.6 seconds.

If the Verso struggles to stay with the Laguna off the line, it lags even further behind in the bends. It can be hustled surprisingly quickly, but passengers are likely to demand a slower pace, thanks to the large amounts of body roll. The lifeless steering provides precious little feedback, too.

The tall body also makes itself felt under braking, where the Verso squirms as the weight loads up the front wheels. The suspension has clearly been set up for comfort rather than agility, which makes the T180 an excellent long-distance cruiser.

At the pumps, the Verso boosts its prospects, because although it matches the 400Nm torque output of its rival, the Toyota averaged 30.7mpg over our tough test route, compared to 27.8mpg for the Renault. Will that be enough to swing the verdict for the people carrier?

High-performance diesels are thirsty when you work them hard, but the Verso edged ahead of the Renault with a 30.7mpg return. Expect that to drop if you use all seven seats regularly.

Residuals for the Verso T180 of 41 per cent after three years look set to better those of the Renault. The best performer in the Verso range is the T2 diesel at 48 per cent.

Toyota dealers have a reputation for reliability, and came seventh in Driver Power. But intervals are short, and the 184-strong network is small compared to Renault’s.

Lower emissions of 178g/km and the T180’s slightly cheaper list price mean it will cost less for lower band company car drivers – but only by £18!