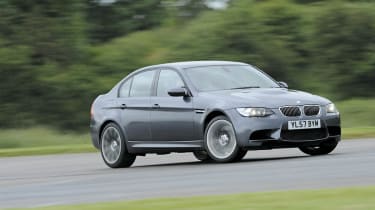 The first M3 saloon was launched in 1994 and aimed at M customers who wanted their performance in a less ostentatious and more practical package. The latest version follows the same formula, and successfully strikes a balance between sportiness and subtlety.

Its interior is identical to the Coupé’s, so it’s easy to live with, neatly laid out and very well built. Rear passengers will also prefer this M3 because there’s a decent amount of legroom, while the extra pair of doors makes climbing in the back far easier than it is in the two-door or cabrio.

Importantly, you can carry three people in the rear rather than two, while the 450-litre boot is the biggest of our trio. It’s 20 litres larger than the Coupé’s and 100 litres up on the Convertible’s, so the saloon is easily the most practical M3 in the family. Crucially, it drives like the two-door, too. The slippery body ensures it’s just as aerodynamically efficient as the sleek Coupé, and also shares the same wheelbase and weight distribution.

Overall, the saloon body is 35mm shorter, but mechanically there are no differences. The V8 engine and transmission are identical, as are the gear ratios – so it was no surprise that the two cars were closely matched on the track.

From a standing start, the marginally heavier saloon is slightly slower. It sprints from 0-60mph in 4.6 seconds – one-tenth down on the Coupé. But in-gear, between 30mph and 70mph, the two cars posted an identical time of 3.9 seconds.

The V8 soundtrack from under the bonnet is just as intoxicating. Plus, as with the two-door, the saloon benefits from a Sport button, which sharpens throttle response, and when you turn off the DSC stability control you find out how readily the rear wheels will break traction.

In real-world conditions, the saloon feels the same as the Coupé and, even after driving the pair back-to-back, it’s hard to pin down any significant differences between them. What we would say is that the four-door’s ride is a bit more supple.

The rest of the package is just the same. You’re left feeling slightly removed from the action by the slightly artificial feedback from the steering, but the car’s awesome turn-in, massive levels of grip and mighty traction remain.

The saloon also costs less to buy than either stablemate, and looks good value in this company. The question is whether that is enough for it to triumph here.

Price: £49,900Chart position: 2WHY: Not since 1999 has the M3 been offered as a four-door. And the greater practicality makes this model tempting.

It's difficult to put a price on practicality, but the saloon has the bonus of four doors and the biggest boot of our M3 trio. Plus, this is the cheapest M3 to buy. The trouble is, the cost saving is wiped out by depreciation – the Coupé will be worth more after three years and 60,000 miles. Although the four-door’s slightly heavier body will have a small impact on fuel economy, none of these cars is especially good at the pumps, so high-mile drivers will pay the price no matter which bodystyle they choose. As with any M3, road tax costs £400 a year – for now.