Open-top stunner is latest to arrive. Is it a compromised choice? 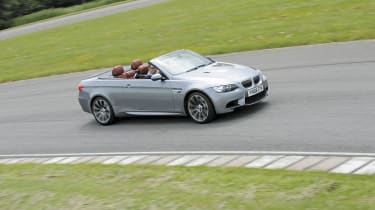 High-performance convertibles are often a contradiction in terms, because chopping the roof off any car is bound to have a serious impact on its dynamics. The M3 has previous form when it comes to drop-tops, though, as BMW even produced a Convertible version of the original E30. Only 786 examples were built, but the cabriolet has been an integral part of the M3 landscape ever since.

While the open model has been around since the start of the M3 story, it has always had an image problem. Running the Coupé says you are an enthusiast who wants a real driver’s car, but the drop-top is for those who rate wind-in-the-hair fun over pace and dynamic ability – and with good reason.

Past M3 Convertibles have never lived up to their tin-top stablemates from behind the wheel, and they’ve never shared their performance car kudos as a result. All that could change with the latest model, with its clever folding metal roof. This promises far more chassis strength – so can the cabrio finally rival its M cousins on the road?

It looks the part. With the roof up, it’s similar to the Coupé, but fold the three-piece hard-top and it’s worlds apart. The neat hood stows without compromising rear styling, although it does hamper the car’s practicality. While the rear seats are roomy, even with the roof in place, boot capacity is the smallest here, at 350 litres. Fold it, and this drops to only 210 litres.

The extra strengthening means the Convertible weighs 250kg more than the Coupé, and this plays a part in its slower 0-60mph time – it was seven-tenths-of-a-second down. In-gear, though, the cabrio feels as feisty as the other cars, and with the roof folded the V8 sounds even better.

Our test model was fitted with BMW’s double-clutch M DCT gearbox. The £2,590 option is available across the M3 line-up, and is a few kilos heavier than the manual transmission. However, as well as an extra gear, the seven-speed system offers shorter ratios, so it cuts two-tenths-of-a-second off the 0-60mph sprint time for each variant. Without M DCT, the cabrio would have been even further behind its stablemates.

While most people will use the steering wheel-mounted paddles to change gear, the set-up gives owners the option of full auto mode. The relaxed setting suits the Convertible – although that’s not to say this M3 has sacrificed its dynamic abilities.

The weight of the hood is hard to avoid, and the cabrio does feel slower to change direction. But the handling traits of the Coupé and saloon are both in evidence.

Given the size of the engine and stiffness of the suspension, the M3’s ability to resist body flex is impressive. The Convertible is worthy of the hallowed badge – but does that make it the best choice here?

Price: £55,300Chart position: 3WHY: Drop-top versions of the M3 have been sold before, but this is the first with a metal roof. We see how it compares.

Latest-generation Convertible is the most expensive and least flexible car in our test. It’s the best drop-top M3 yet – although it comes with a hefty weight penalty, and owners will find this makes itself felt at the pumps. Our fuel return of 15.6mpg is truly abysmal, even for a car with this much pace. It dents the cabriolet’s credentials as a machine you can drive every day – although the Coupé’s 18.6mpg figure is nothing special, either. The automated box adds £2,590, but detracts from the driving experience, so save the money... and spend it on petrol instead!