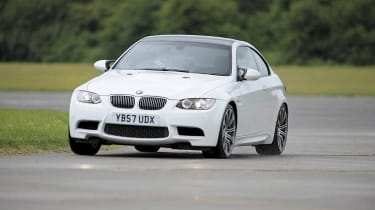 Most people think of the M3 as a two-door coupé. This is how the model first appeared and also how the latest car arrived in the UK. The model remains the biggest seller, and BMW expects to shift 1,700 Coupés next year, compared to 900 Convertibles and 400 saloons. So, is it the best of the three?

With its sleek profile and low roofline, it certainly looks racy – especially as the Coupé is the only M3 in the line-up to get a lightweight carbon fibre roof. The unpainted panel stood out against the white bodywork of our test model, and shows the M3 is much more than just a tuned two-door 3-Series.

Incredibly, the flagship shares only its doors, bootlid and light clusters with the standard car. Bulging wheelarches, subtle detailing and trademark quad exhausts all help to give it a much more aggressive look. The same can’t be said of the inside, though. From behind the wheel, the supportive sports seats and chunky wheel are the only real differences. There’s no hike in luxury over the standard 3-Series – considering the £51,330 price tag, that’s disappointing.

Still, the M model is about thrills, not cruising, and the latest-generation model doesn’t disappoint. The engine is the first V8 to grace a full production M3, and with peak torque arriving from 3,900rpm, it gives a gutsy surge of power across the rev range.

Acceleration is seriously impressive, and a glorious eight-cylinder soundtrack accompanies every prod of the accelerator. The Coupé is the lightest M3 – it weighs 25kg less than the saloon – and the fastest. BMW claims it covers 0-60mph one-tenth-of-a-second quicker than the four-door! Our figures back this up, although on the road there isn’t much difference between the two.

Handling is closely matched, too, and the Coupé is sensational to drive, with colossal grip and body control. Its brakes are strong and fade-resistant, while steering is sharp and precise. Turn off the traction control, set the electronic throttle to its sharpest mode and stiffen the dampers, and the M3 becomes a raucous, rewarding muscle car.

The catch? It’s only involving at speeds that are unrealistic on public roads – so you need a test track to truly appreciate the depth of its abilities. Will the Coupé’s stablemates fare any better in the real world?

Price: £51,330Chart position: 1WHY: It was the first of BMW’s latest-generation M3s to appear, and Coupé’s muscular body makes a big statement.

In terms of price, the Coupé falls between the other M3s – it’s £1,430 more expensive than the saloon, but £3,970 less than the Convertible. While the two-door will be the biggest seller of the three, strong residual values help to make it the best bet. Servicing costs are hard to gauge for all M3s because the on-board computer tells you what needs to be done and when. The main dealers we spoke to told us this means more garage visits, but lower maintenance bills – although a great deal will depend on how you drive the car.