Australian-built machine is most powerful Vauxhall on sale 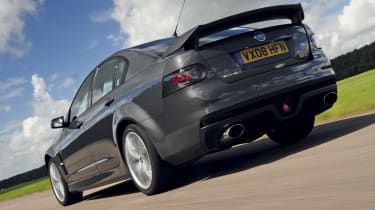 The Holden HSV is well known in Australia, but it’s much more rare in Vauxhall guise. True to its brutish character, the big four-door VXR8 is more beast than beauty. With chunky wheelarches, a huge rear wing and an aggressive stance, it’s the toughest-looking car in the firm’s range.

Inside, the layout is straightforward, and while there’s a fair amount of grey plastic, build and material quality are a step above the Mitsubishi’s. The large steering wheel adjusts for reach and rake, and the chunky seats have a decent range of movement.

The position of the gearlever and the shape of the dashboard make the VXR8 cabin seem more would-be executive than cosseting supersaloon. Nevertheless, with a wheelbase 265mm longer than the Evo’s, the Vauxhall has more rear legroom, and its large overhang at the back affords a massive 496-litre boot. Yet the VXR8 tips the scales at 1,831kg – or 271kg more than the Evo. Add a two-wheel-drive chassis set-up, and surely the Vauxhall will lag behind its rival here?

Only just. At 5.3 seconds, it was less than half-a-second slower than the Mitsubishi from 0-60mph – all thanks to brute force. The 425bhp newcomer has 19bhp more than the outgoing 6.0-litre VXR8, and so offers significant 71bhp power and 58Nm torque advantages over the Evo.

The V8 in the Vauxhall couldn’t be more different in character to the four-cylinder in the Mitsubishi. Without the latest valve-timing technology, the eight-cylinder doesn’t rev as high or spin up as fast.

Yet its torque gives real low-down punch and, with our car’s optional sports exhaust, it sounds glorious. Longer ratios mean it’s easier to get bogged down in the VXR8 than in the Japanese model, and that makes the Vauxhall feel lazy next to its manic rival. Reaching for lower gears is also a chore, as the box has a heavy and mechanical feel.

While there’s no shortage of grip or traction, its weight makes the car seem underdeveloped and cumbersome on rural roads. The steering is vague and body movement is excessive, as is suspension travel. This lack of composure means the VXR8 never feels as agile or planted – and doesn’t inspire as much confidence – as the lighter and sharper Mitsubishi.

Still, the ride isn’t as harsh as the Evo’s and this is the more relaxing car on the motorway. The blend of attributes and character makes the Vauxhall very likeable – it’s well equipped and top value, too. So, will this laid-back approach win the day here?

Chart position: 2WHY: With the help of a higher-powered V8, Aussie saloon is a real street dragster.

Although £35,995 is a lot to pay for a Vauxhall, that’s around half the cost of some 400bhp-plus V8-powered opponents. As the VXR8 sells only in small numbers, depreciation is difficult to calculate – so our experts are unable to provide any predictions for the newcomer. However, the cost of fuel and tax is likely to hit the second-hand appeal of this large-capacity model. While only 33 dealers nationwide can service the LS3, it covers 20,000 miles between check-ups – so it goes twice as far as the Evo before needing attention. We were quoted £180 for each of the first three services. Insurance premiums are harder to swallow, at £1,490.