Latest Evo makes up for power deficit with hi-tech mechanicals 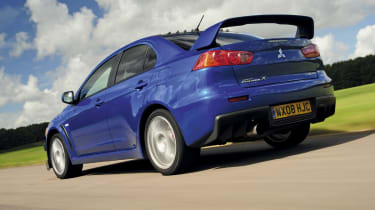 If you plan to exploit the full potential of the Evo X, hold on tight! Stepping up the thrills through all 10 generations has resulted in a mighty Mitsubishi with pace to rival supercars costing three times as much.

The latest Evo was designed to have a more mature image, which would set it apart from traditional rivals and make it the flagship for the firm’s styling direction. That brought it in line with competition such as the VXR8 for the first time.

With its aggressive front-end detailing and sharp dimensions, the current Evo looks the part. Emphasising the point, the FQ-360 gets a purposeful carbon lip spoiler plus a spiky ‘vortex generator’ on the roof.

The Evo X has a 30mm wider track than its predecessor and the wheelbase is 25mm longer, so rear legroom has improved – but it can’t still match the much bigger Vauxhall for passenger or boot space. This car wasn’t built for versatility, though – ever since it first came into existence in 1992, it’s had one thing on its mind: exhilaration.

So it’s no surprise the interior plastics feel a little cheap and the design lacks any sense of occasion. The driving position is good, thanks to the Recaro seats and small three-spoke steering wheel, but the FQ-360’s carbon gearknob and handbrake look low-rent and aftermarket – as does lots of the plumbing under the bonnet.

Tuning firm HKS provides all the extra bits to increase the output on the flagship Evo, and the result is 354bhp. Our timing kit gave a reading of only 4.9 seconds for the 0-60mph sprint, and in-gear response is superb, too. The turbo spools up early, and from just under 3,000rpm, the rev counter soon spins round to the red line. With its rally-bred chassis, the Mitsubishi changes direction without hesitation, too.

Delivering a much more engaging driving experience than the semi-auto option, the manual gearbox works with the 4x4 system to provide perfect traction. So, even without troubling its standard stability control, there’s immense grip.

The stiff chassis and virtually non-existent body roll ensure the Evo is a revelation on a twisty road. Turn into a corner and the reactions are unnervingly sharp. Switch off the traction control on the test track, and through high-speed bends, it’s clear the Mitsubishi has been designed to slide, too.

This uncompromised experience helps make the Evo X so addictive. But with its firm ride and lack of a cruising sixth gear, it’s challenging as a daily driver.

Chart position: 1WHY: Despite its small 2.0-litre engine capacity, the Evo X is a high-performance firecracker.

Drive an Evo and people will ask you how fast it is first – but then they want to know how much it costs to run. And Mitsubishi has addressed the second issue with this latest model, coming up with a great servicing package: a £400 fixed-price deal that covers the first three checks, plus the 1,000-mile oil change. The three-year warranty has no mileage limit and, with a quote of £1,011, the FQ-360 is more than £400 a year cheaper to insure than the VXR8. As with its rival, the Vauxhall sits in the top road tax band, so you pay £400 for a year’s disc. And our experts calculate that the FQ-360 will retain 40 per cent of its value over three years and 36,000 miles.