Shapely newcomer brings a dash of new style to the class. 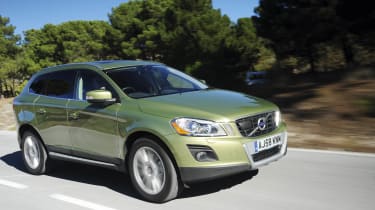 He Q5 isn’t the only newcomer in the premium compact SUV class – the Volvo XC60 also aims to make an impression in the sector.

The Swedish model has stayed true to the original concept, which was revealed at the 2006 Detroit Motor Show. As a result, the production version is a real head-turner.

With its swept-back lamp clusters, shapely profile and high-stacked rear lights, it drew admiring glances on our test route, while the Audi passed by virtually unnoticed.

Inside, you get a typical Volvo cabin, with big, comfortable seats and a simple, modern layout. The ‘floating’ centre console dominates the dashboard, while white backlighting gives the dials a smart look.

Get behind the wheel, and you won’t enjoy the range of adjustment offered in the Q5, but the soft seats are very comfortable. It’s a similar story in the back. The XC60 has a shorter wheelbase than the Audi, but legroom is a close match and a flatter transmission tunnel means the middle chair is more accommodating. The rear seats split fold 60:40 – but they don’t slide – while the boot is wider and longer than the Q5’s. Other neat touches include illuminated door kick plates and a built-in child booster seat.

Unfortunately, the driving experience doesn’t impress as much as the cabin. The XC60’s chassis feels rigid and unwieldy, and it lacks the Audi’s body control and agility. It rolls more when cornering, and there’s greater weight transfer as you change direction.

Combined with the numb steering, this means the Volvo doesn’t inspire the confidence of its German rival on twisty roads. The suspension’s ample travel doesn’t stop nasty crashes entering the cabin, either, and on bumpy tarmac the XC60’s ride is unsettled. Even on the motorway, expansion joints can upset the otherwise impressive cruising refinement.

The combination of five-cylinder D5 diesel and optional Geartronic auto doesn’t gel, either. Despite having six ratios, the box searches for gears too readily, and has the annoying habit of shifting up as you lift off the accelerator. Manual mode gives you more control, but the changes don’t have the speed and accuracy of the S tronic gearbox that is offered with the Q5. And while the D5’s five-cylinder engine note is unique, it’s gruff under load.

Despite a 50Nm advantage over the Audi, the XC60 doesn’t have the performance to match the Q5. This is largely due to the extra 97kg it carries, which certainly contributes to the car’s poor dynamics.

As you would expect, the Volvo is packed with safety features, and it feels solid and substantial. Hill descent control is standard, but the XC60 isn’t an accomplished off-roader like the Land Rover. Crucially, it isn’t as refined or relaxing as the British contender, either. Given that it falls short of the Audi for comfort and involvement on the tarmac, its impressive style, quality and design might not be enough to take victory.