British model is hugely talented, both off-road and on tarmac. 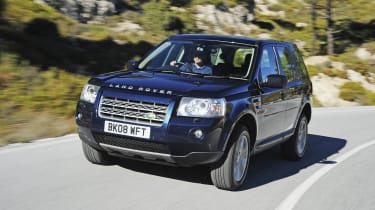 hile Audi and Volvo are new to the small luxury 4x4 party, Land Rover is a veteran of the class. But don’t write off the Freelander as a pure mud-plugger, as the model which took the best compact SUV award at our 20008 New Car Honours is a great all-rounder.

It looks great, managing to be utilitarian and stylish at the same time. This classless appeal ensures it’s equally at home on the farm as it is in an upmarket urban street. The chunky detailing means that it’s unmistakably a Land Rover, too.

The interior is just as appealing. It doesn’t have the executive feel of the Audi or the minimalist design of the Volvo, but there’s no shortage of charm. The sensible layout, chunky switches and tough build quality mean it’s every inch the junior Range Rover. Finding a comfortable driving position is easy, and few cars offer such a relaxed cabin.

Passengers in the back fare well, too. Legroom is tighter than in the Audi, but the lower floor means the Freelander feels more spacious. The only drawback with the Land Rover is the boot – it’s shorter and narrower than its rivals’, and the space below the parcel shelf isn’t huge. Only when you fold the seats and load to the roof does the Land Rover have the biggest capacity.

Head off road, and the Freelander immediately has the upper hand. With the most ground clearance and Land Rover’s excellent Terrain Response system, the Freelander is truly talented in the rough stuff. Crucially, this doesn’t come at the cost of its ability on the road.

The British SUV isn’t as entertaining or as nimble as the Q5, but it’s accomplished nonetheless. Initial roll in corners is greater than in the XC60, but the light, accurate steering keeps you in touch with the road, while the damping maintains body composure. As a result, the Land Rover feels lighter on its feet than the Volvo.

What’s more, the Freelander’s ride comfort is far superior to the XC60’s. Supple suspension, a hushed cabin and a smooth-shifting auto gearbox mean the Freelander is as comfortable in the city as it is on the motorway. And while the 2.2-litre engine, which was co-developed with the diesel experts at Peugeot, is beginning to show its age, the unit is smooth and has decent throttle response.

However, it recorded the highest noise figures in our test, and while the auto box is less prone to unexpectedly shifting gear than the XC60’s, it can’t match the control of either the manual or S tronic auto in the Q5.

It isn’t as quick as the Audi in the 0-60mph sprint either, taking 10.1 seconds, but such is the broad spread of the Land Rover’s abilities that it doesn’t really matter. Blending great off-road skills with excellent tarmac comfort, few cars are as relaxing to drive.

All this comes at a cost, though. It doesn’t have a premium badge, but the Freelander is the most expensive model here.