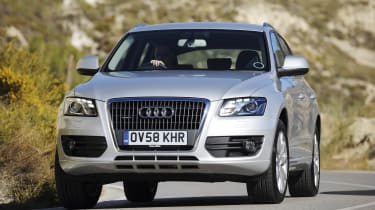 Audi is a relative newcomer to the SUV sector, but the company is a world leader when it comes to four-wheel-drive technology.

Quattro drivetrains have appeared across the firm’s range since 1981, which makes it all the more amazing that the 4x4 know-how wasn’t applied to a fully fledged off-roader until the Q7 arrived in 2005.

The new Q5 demonstrates that Audi’s first foray into the rough wasn’t a one-off. Similar rear end styling to the Q7 means the newcomer retains a familiar look, but it is closer in size to an A4, and blends Audi’s chunky styling with a raised ride height. The looks aren’t groundbreaking, but the Q5 is smart and well proportioned.

Despite having the longest wheelbase in this test, space in the Audi’s cabin is far from class leading. Rear legroom is fine, but the large transmission tunnel limits comfort for passengers in the middle seat. Versatility is boosted if you choose the optional sliding rear bench. It splits 60:40, and both parts can be moved independently. This improves boot space, but the steeply raked rear window restricts ultimate practicality.

There’s little to fault up front, though, as the cabin looks great and is wonderfully put together. The dash is similar in layout to the A4’s, and features Audi’s MMI control system, an electric parking brake and a superb seating position. The Q5’s tall stance means visibility is first-rate, too. In fact, its excellent road manners mean that sometimes only the higher seating position reminds you that you’re in an SUV.

Body roll is better controlled than in its rivals and, thanks to positive steering, the Q5 turns in to corners with an accuracy that’s missing from the XC60 and Freelander.

While the ride is firm, it’s well damped and copes far better than the Volvo over bumpy surfaces. Add in strong brakes, and there’s little to fault about the Q5’s on-road ability.

Hill descent control is fitted as standard, while the stability control has an off-road setting, but the Audi is no rival for the Land Rover in the rough. However, it has enough ability to suit most drivers’ needs. Bosses predict that the majority of buyers will choose the optional S tronic auto, but the standard six-speed manual has a satisfying shift that complements the punchy and refined diesel.

The 2.0-litre unit is the smallest in this test, but it still offers gutsy performance. A 0-60mph time of 9.8 seconds is the fastest here, and is helped in part by the fact the Q5 has the lowest kerbweight. And despite having a 50Nm torque deficit, the Audi matches the Volvo’s in-gear pace. Throttle response is sharp, while refinement is impressive: the Audi recorded the lowest internal noise figures of this trio.

With the cleanest emissions, decent fuel economy and the best residual predictions, the Q5 is a convincing all-round package.