Closely matched on price, these SUVs will be difficult to separate 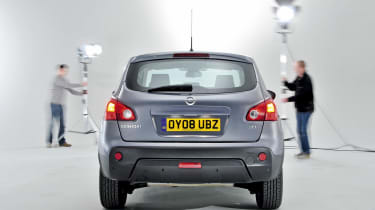 These days, few things are likely to damage your street cred more than driving a big off-roader. Environmental concerns and high fuel prices have lumbered large 4x4s with an image issue.

So, buyers wanting rugged looks and a commanding driving position are trading down to compact SUVs. With family hatchback-style running costs, they are the acceptable face of four-wheel-drive motoring. Our current favourite is Ford’s Kuga. With its sharp styling and polished on-road dynamics, the blue oval’s latest SUV proves off-roader fans need not make many compromises.

But if there’s one area in which the Kuga could improve, it’s price. Despite Ford’s value-for-money reputation, a mid-range 134bhp 2.0-litre TDCi Titanium 2WD variant is £20,995. The line-up starts at £18,995, but could your money go further elsewhere? Nissan can give you the same tough look as well as save you cash. Pick the Qashqai crossover in range-topping 148bhp 2.0-litre dCi Tekna trim – also with front-wheel drive – and it will cost £19,795, representing a saving of £1,200 over the Ford.

The Kuga has a more upmarket appearance, though. With its large, Mondeo-style headlamps, sculpted sides and sweeping roofline, the Ford offers premium appeal. Look more closely, and you’ll spot neat details such as the chrome vents mounted in the front wings, and the twin exhausts.

Sadly, the Nissan can’t pull off the same trick. The Japanese car is bland in comparison, despite its raised ride height, black lower body cladding and 17-inch alloy wheels. And the Ford’s superiority extends to the cabin. As with the exterior, the styling is more adventurous than that of its rival, and the quality of materials is superior. The dashboard has a smart alloy finish, while the seats are finished in a classy part-leather trim. Getting comfortable behind the wheel is easy, too, and the Focus-sourced switchgear operates with precision.

Climb aboard the Qashqai, and you’re greeted with a much more utilitarian interior. While the fit and finish are excellent, the overwhelming use of dark plastics makes the cabin feel more subdued than that of its competitor. The standard panoramic glass roof helps to alleviate the gloom, though, while there’s plenty of standard equipment to distract occupants from the sombre surroundings. Full leather trim, a Bluetooth phone connection, six-disc CD changer and keyless entry are all included. You would have to dip into the extras list to kit your Kuga out to the same degree.

The Nissan is more practical, too. While there’s little between these two contenders for passenger accommodation, the Japanese car has a bigger boot. Open the tailgate, and you reveal a useful 410 litres of carrying capacity, which stretches to 1,513 litres with rear bench stowed. In comparison, the Kuga manages 360 and 1,355 litres respectively. However, the Ford scores bonus points for having a split tailgate arrangement. In tight parking spots, you can flip open the rear glass to load up without having to raise the whole bootlid.

On the road, there’s even less between the two hatchbacks. Given its power advantage, you might expect the Qashqai to be ahead in the performance stakes. But with a 0-62mph time of 10.5 seconds, the Japanese car is only one-tenth faster.At the pumps, the Kuga claims to deliver combined fuel economy of 46.3mpg, while the Qashqai achieves only 42.8mpg – which is a significant 3.5mpg less.

The blue oval model is cleaner, too, with official CO2 emissions of 159g/km; an output of 174g/km pushes the Nissan into a higher road tax band. But it’s when you turn into a corner that the Kuga delivers its knock-out punch. As with other models in the Ford line-up, it provides class-leading driving dynamics, good enough to embarrass many conventional family hatches. The Kuga displays excellent body control through bends, despite its raised ride height, while the well weighted steering gives plenty of feedback.

After spending time in the Ford, the Qashqai feels far less agile, and it can’t match its rival for grip and agility. The ride isn’t as forgiving, either, making the Nissan less comfortable over poorly surfaced roads. Buyers can pay extra for an all-wheel-drive transmission on both models. Yet despite their chunky appearances, neither car is up to serious off-roading. So why pay more?

This was the closest of our four encounters. With £1,200 separating the cars, making a decision was tough. We’ve been impressed by the Qashqai before, and it still makes a strong case for itself. It’s solid, practical and well equipped, and is a versatile alternative to a family hatchback. But it can’t compete with the Kuga’s style and ability. The Ford looks like a premium product and has handling to match. Better still, if you can live with less kit, you can pick up an entry-level Kuga Zetec for £18,995. While basic Qashqai variants are yours for as little as £14,095, the blue oval model feels like a more classy, upmarket SUV.

WHY: The Nissan is more at home in the urban jungle – as is Ford’s pricier Kuga.