Does cool coupé have the beating of premium badge rival? 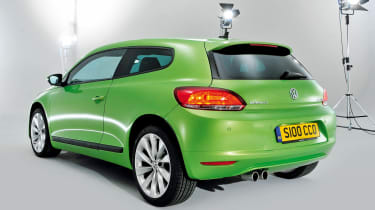 When a designer lets style take precedence over all else, you usually end up with a coupé. Rakish looks, sleek lines and typically limited practicality should ensure these models have desirability to spare. And coupés don’t get much sleeker than the Mercedes CLC. The glamorous German model looks sharp, while the three-pointed star badge means it oozes appeal. But like all designer labels, there’s a price to pay. Pick the mid-range CLC 230 Sport, and you will have to fork out £23,770.

However, one high street alternative arguably turns even more heads: the VW Scirocco. Choose the range-topping 2.0 TSI GT version, and you’ll be charged £21,340 – a saving of £2,430 over the similarly powerful Mercedes. With its aggressive nose, wide stance and broad shoulders, the Scirocco attracts attention wherever it goes, particularly when finished in the striking metallic green paint of our test car.

In comparison, the Merc lacks visual impact. It has a more upright stance and looks more like a premium hatchback than a sleek coupé. A C-Class-style nose gives great presence, but the stubby tail is at odds with the elegant aspirations. Open one of the long Merc’s doors, and it’s hard not to be disappointed. The dashboard is from the previous C-Class, which first appeared nearly 10 years ago. The fit and finish are good, but the plastics feel cheap.

At least the CLC is practical. Its taller body reaps rewards in terms of cabin space, with occupants in the back being treated to decent head and legroom. Lift the tailgate, and there’s 310 litres of space, while folding the rear bench boosts this to 1,100 litres. The VW lags behind its rival in the versatility stakes. For a start, its boot is marginally smaller, at 292 litres. It’s also a four-seater, with passengers in the rear getting two individual chairs. As with the Mercedes, the Scirocco takes its dash from another model – in this case, the Eos drop-top. It’s well built from high-quality materials, but it lacks flair.

Fire up the 197bhp 2.0-litre engine, and it soon becomes clear the Scirocco has the pace to match its looks. The punchy powerplant propels it from 0-62mph in 7.2 seconds. What really impresses, however, is the strong overtaking thrust. Despite having a larger 2.5-litre V6, the CLC is left trailing. The unit is smooth, but the Merc weighs 1,525kg – that’s 227kg more than the VW – which severely blunts acceleration. On the plus side, CLC buyers more concerned with comfort than outright pace can specify a seven-speed auto for an extra £1,101. Go for VW’s DSG semi-auto on the Scirocco, and you’ll have to find an additional £1,210.

Whatever gearbox is fitted to the VW, it has the advantage on twisty roads. Turn into a corner, and the Scirocco responds sharply, with strong grip and great body control. Thanks to standard three-way adaptive dampers the car also rides well, soaking up even big bumps. Despite its sporting pretensions, the CLC struggles to deliver an involving experience. Its rear-wheel-drive chassis is based on an old design, and it feels soft and unresponsive.

The CLC falls even further behind when you factor in running costs. Combined fuel consumption of 29.7mpg trails the Scirocco by 7.5mpg, while a CO2 figure of 225g/km places it in the top road tax bracket – the VW produces a more respectable 179g/km. One advantage of the Merc’s higher price is a longer list of standard kit. While you have to pay more for an auto, you’ll also get parking sensors, cruise control and metallic paint. Add all of this to the VW, and it will cost you £2,150!

However, the Scirocco still holds an advantage, thanks to its lower running costs, eye-catching looks, better performance and sharper dynamics. There’s no getting away from the fact that the CLC feels old-fashioned from behind the wheel.

Few buyers can resist the strong pull of the Mercedes brand. Having the three-pointed star on any grille suggests style, quality and success. Sadly, this enviable image is not enough to save the CLC. Beneath its classy lines is an old-fashioned car which falls behind the standards set by the company’s other models. In contrast, the Scirocco uses VW’s very latest technology, and is every bit as good as it looks. Add great dynamics and decent practicality, and it easily outscores the Merc. Just don’t expect to save thousands. Once you’ve ticked a few boxes on the VW’s lengthy options list, the price gap between the two coupés soon closes.

WHY: Stubby three-door shape gives the Scirocco a similar profile to the upmarket Mercedes CLC.