Brand image counts most in the luxury performance car class – so which Brit gets our vote? 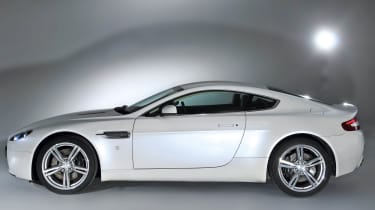 Anyone lucky enough to be at the top end of the new car market stands to make big savings if they think smart with their ultra-desirable purchase.

Let’s face it – we would all love to own the keys to either an Aston Martin V8 Vantage or a Bentley Continental GT. But which would you rather have sitting on your driveway? More importantly as far as finances are concerned, park the two side-by-side on the high street, and which do you think passers-by would say is pricier?

While some of the pairs of cars in this test look alike, these two don’t. They are a close match for desirability, style and image. Yet incredibly, there is a price difference of nearly £35,000 between them! Neither can be described as a bargain, but the Aston Martin costs £83,191, while the Bentley comes in at £117,900. Judging by the example pictured here, opting for the Aston doesn’t compromise on style. In its stunning pearlescent white paint finish, our test car is simply breathtaking.

Building on the elegance of the larger DB9, the entry-level Aston Martin is smaller, leaner and more muscular than its big brother. It’s arguably one of the few models on sale today that looks jaw-droppingly perfect from every angle. Arrive at your Monaco hotel in this, and it’s sure to get pride of place in the valet parking lot. However, let’s not forget every inch of the Aston’s style is matched by the presence of the Bentley. Even without the grace and sophistication of the Vantage, nothing says you’ve arrived like the imposing bulges and curves of a Continental GT. There’s also the question of brand image. Does Aston Martin’s bulletproof badge really have the draw of Bentley’s timeless winged emblem?

Climb inside, and it’s clear the two models are built for differing purposes. The Aston’s cabin has as much visual appeal as its exterior, with futuristic dials, beautifully stitched leather trim and a great view through the intense heat haze that invariably rises from the bonnet. Yet quality takes a significant step up when you slide into the Continental, even if it misses out on some of the design flair that makes the Vantage feel special. That’s not all. Produced as a genuine all-purpose Grand Tourer, the Bentley has room for four, whereas the Aston accommodates only two. And the latter’s significantly harder ride makes it less comfortable over long distances.

In entry-level form, the British-built Vantage has a six-speed manual gearbox. As it transmits 420bhp and 470Nm of torque from the front-mounted 4.7-litre V8 to the rear wheels, the Aston has the brutish feel of a muscle car rather than the finesse of a tourer. The driving experience confirms that opinion. Performance is effortless in any gear, and there’s just as much enjoyment to be had from the warbling V8 soundtrack as there is from the thrilling pace.

However, the Vantage errs towards tail-happy handling, so it isn’t the most adept in its class at tackling corners. Its character more than makes up for it, though, and the V8 has a feelgood factor that’s hard to match. While the Bentley offers similar performance, it couldn’t be more different from the Aston to drive. For a start, the more expensive GT’s power delivery is all about seamless, smooth acceleration rather than spine-tingling exhilaration. Building up speed is effortless, and negotiating a challenging road requires much less labour at the wheel.

The Bentley is powered by a 6.0-litre 12-cylinder engine developing 552bhp and 650Nm of torque. In a game of top trumps, it wipes the floor with Aston’s entry-level model and, on the road, its instant thrust is far easier to control at any speed. Want to creep around at 30mph? No problem. Have a desire to blast along at 198mph on a test track? Here’s the car that can deliver on all fronts. Bentley’s Continental GT is an outstanding long-distance tourer, and one which has few true rivals. We’re equally convinced it has a range and depth of ability that Aston Martin’s least expensive model simply cannot beat.

However, in the Vantage V8 Coupé, Aston has created a model which provides similar brand cachet, as much emotive appeal and a considerably cheaper price tag than the big Bentley. So will these considerations be enough for the Aston to win us over?

YOu can’t take anything away from the Continental GT – it’s one of the most sumptuous luxury cars on the planet, and it also offers pace that’s virtually unbeaten in any class. However, when it comes to sheer road presence, style and desirability, we reckon the Aston Martin gets closer to the Bentley than the £35,000 price difference would suggest… Nobody is saying that there isn’t a place for Bentley in the upper echelons of motoring, but you can’t argue with the strength of the super-cool Aston badge. And let’s not forget that if you need more practicality, the British manufacturer has the four-seater DB9, too.

WHY: The V8 Vantage isn’t cheap – until you compare it to Bentley’s luxury coupé!