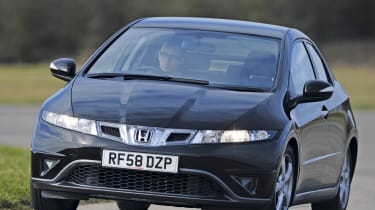 Forget the high-revving Type R hot hatch – if you want a fun and affordable Honda Civic, you can’t beat the cheaper 1.4-litre i-VTEC. It doesn’t offer the capacity of its Renault and VW rivals, or the turbo assistance of the Skoda, so does it have what it takes to compete at this end of the family car sector?

The Japanese firm has now made its smallest i-VTEC unit available with a manual gearbox – until now, the i-SHIFT CVT was the only choice in five-door guise. However, nothing about the 1.4-litre Civic suggests it’s an entry-level model.

You get 16-inch alloys as standard, plus the same metal-effect front door handles as seen on more expensive Civics. It’s a similar story inside, where the fit and finish are excellent. The design of the cabin continues to split opinion, though – you’ll either love or hate its futuristic layout.

Our biggest complaint with the cabin is the flawed driving position, as the seat doesn’t lower far enough for everyone to get comfortable behind the wheel.

We have no problem with the Civic’s 485-litre boot, though. It is 113 litres larger than the Mégane’s, while the Honda’s ingenious fold and tumble rear seats mean it’s incredibly versatile. Only the Skoda can match it for practicality.

With a normally aspirated 1.4-litre petrol engine under the bonnet, the Honda has the smallest output of this group. Modest power and torque figures of 99bhp and 127Nm meant the British-built hatch was the slowest of the quartet at the test track.

The 0-60mph sprint took 11.5 seconds – that’s 2.4 seconds longer than the Skoda – and in-gear response was equally sluggish. Yet while the Civic isn’t quick, there’s plenty to like about its willing engine. Low-end torque is in short supply, so you have to work it hard to keep pace with fast traffic, but it never feels strained.

In fact, the VTEC variable valve timing thrives on hard use. A delicate throttle response, crisp gearchange and strong refinement also make it easy to forgive the performance gap.

As if that wasn’t enough, the Civic is entertaining in corners. It was easily the sharpest and most agile car, with a positive turn-in, excellent body control and plenty of feel through the steering and pedals.

While the Honda is engaging on B-roads, it’s easy to drive in town, too. But the firm suspension doesn’t deal with potholes as effectively as the Octavia’s, and it can’t match the Skoda’s long-distance comfort.

The Civic does come well equipped, with climate and stability control, electric windows and a multifunction steering wheel all fitted as standard. And at £14,540, it’s £20 cheaper than its Czech rival. Can the British-built hatch overcome its size disadvantage to take the victory?

Chart position: 2WHY: Hot Civic Type R steals all the Honda headlines, so how does this lesser petrol variant compare?