Will class leader prove to be just as strong in entry-level trim? 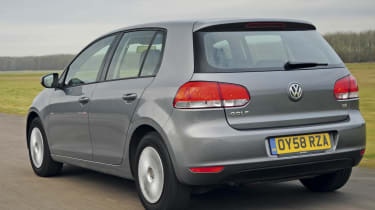 Few models can match the Golf’s sizeable family tree. The enduring hatchback is now in its sixth generation, and has already established itself as an Auto Express favourite. But does the newcomer still appeal in entry-level 1.6 S trim?

With wheel trims rather than alloys, plus a plain plastic grille, the five-door hatchback is undeniably conservative. Yet its solid and well proportioned styling is pure MkVI Golf. This evolutionary approach has helped to make the car an institution over the years, and even in base spec the impression you get from the outside is of rock-solid build quality.

The cabin has the same appeal – because it’s impeccably put together and simply laid out. The bad news for VW is that the Skoda is equally impressive inside, and comes far more generously equipped as standard.

What’s more, the Czech hatch has the edge over the Golf in terms of rear legroom, while the German car’s 350-litre load area is tiny compared to the Octavia’s 560-litre capacity. Line up the latest VW to the rest of the models in this test, though, and rear passengers get a decent amount of space, while its boot is bigger than the Mégane’s.

Up front, there is loads of steering wheel and seat movement, so the driving position is spot-on. However, the smart leather-trimmed three-spoke wheel – along with the trip computer in our test car – is a £395 option. The Golf’s cabin isn’t particularly clever or exciting, but there’s nothing to dislike, and it doesn’t polarise opinion like the bold Civic’s.

Buyers are likely to be disappointed by the 1.6-litre engine, though. While we’ve been impressed by the firm’s diesels, the 100bhp petrol unit in this model is one of the weakest in the Golf line-up. Not only is it strained at higher revs, it could also be smoother at lower speeds.

To make matters worse, the 1.6 trails the Octavia’s powerplant by 22bhp, and delivers 25 per cent less torque – so we weren’t surprised that the VW was slower to respond during our in-gear assessments. It does provide more performance than the smaller-capacity Honda, however.

Our other main criticism of the Golf concerns the five-speed manual gearbox. It compromises high-speed refinement, which has been a key strength in other variants we’ve tested – the 1.6 S is crying out for an extra ratio. And it doesn’t ride as well as we’ve come to expect, either. Rough surfaces aren’t ironed out at low speeds; the softly sprung Skoda is more comfortable.

None of this prevents the Golf from being composed and unflustered through corners. Fluid steering, strong brakes and plentiful grip make it a great all-round package. It isn’t as engaging as the Civic, but feels tauter than the Renault.

The Golf has the most prestigious badge in this test, and it is also the most costly car. So while it is still an excellent family hatchback, it clearly isn’t at its best in entry-level S guise.

Chart position: 3WHY: We find out if the entry-level Golf 1.6 S lives up to the promise of higher-spec models in the range.