Class leader is a strong choice 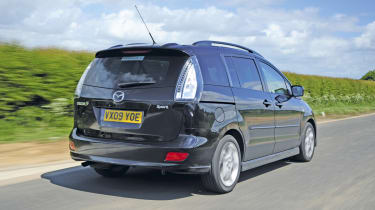 Four years is a long time in the new car industry. So is the Mazda 5, launched in 2005, left feeling its age by two rivals fresh off the drawing board?

Well, it’s still a strong choice. In 2006, it was voted Best MPV in the annual Auto Express New Car Honours, and a facelift late last year breathed fresh life into its smart design.

The people carrier’s basic shape hasn’t changed much, so it looks more like a traditional MPV than the Renault and Toyota. But Mazda’s designers have done a good job. To our eyes, the steeply raked nose, slightly blistered wheelarches and 17-inch alloys provide the 5 with a purposeful stance.

Whether you’re a fan of the styling or not, one exterior feature that wins universal praise is the pair of sliding rear doors. They’re unique in this test and provide a wide, unobstructed opening. They also come into their own in tight parking spots, as they make it really easy to climb aboard.

Once you’re inside, the cabin is well packaged, but ultimately not as spacious as its rivals. Still, there’s no doubt that Mazda’s engineers have worked hard to make the most of the available room.

The company calls its seating system 6+1, and it provides plenty of flexibility. The two chairs in the middle row slide and fold, and also feature lift-up bases. One of these contains a storage cubby, while the other opens to reveal a flip-out cushion that forms a seventh seat.

As with the Scenic and Verso, the two seats in the Mazda’s third row fold easily into and out of the boot floor. When in place there’s as much space as in the Toyota, although the seats aren’t as generous as those in the Renault. Luggage capacity is the Mazda’s biggest weakness. With all the seats in position, its cramped 112-litre load area is the smallest on test.

Move to the front of the cabin and the conventional dashboard is sensibly laid out. It’s beginning to look a touch dated now, but the overall fit and finish are excellent. Better still, there’s plenty of useful cubby space to be found.

Even though the Mazda’s 2.0-litre engine has the biggest capacity of our trio, it isn’t as powerful as the Toyota’s 1.8. However, the Verso is 95kg heavier – and this proved decisive against the stopwatch, as the Mazda covered 0-60mph in 9.7 seconds. What impresses more than this performance is its ability on the road.

This poise, along with the versatile cabin and generous kit tally, mean the Mazda is still a tempting choice. Our newcomers face a tough time trying to knock the old-stager off the top step of the podium.

Chart position: 2WHY: With its sliding side doors, value pricing and sharp dynamics, the class-leading Mazda 5 is difficult to beat.