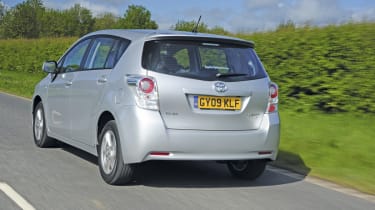 The Verso has always been a well kept secret. The outgoing version of the compact people carrier attracted a loyal following and, with its cleverly packaged seven-seat cabin and famed Toyota reliability, it’s easy to see why. This all-new model promises even more interior space, while Toyota’s designers have tried to inject a much-needed shot of style. So, is the Verso about to win a new legion of fans?

It’s certainly more visually appealing than before. The Verso takes cues from its predecessor, but bold details such as scalloped flanks and large front and rear lamps give it a sophisticated look. Yet it’s more inoffensive than stylish. Toyota’s designers have had even less success with the interior. The large expanses of cheap-looking plastic make the cabin feel low-rent.

Occupants sitting in the front are greeted by a vast and featureless dashboard topped with unattractive centrally mounted instruments. As you would expect, though, build quality is solid and the high-set driving position provides a commanding view of the road.

No matter what you think of the cabin design, the Verso has lost none of its versatility. As before, it features Toyota’s ‘Easy Flat 7’ seating system. This not only sees the three individual chairs in the middle bench slide independently, but they also tumble forwards to aid access to the third row.

Unfolding either of the two rear seats from the floor is a one-handed operation. There’s just enough room for average-sized adults in the back, although this space is really best reserved for children.

Luggage capacity is limited when all seven seats are in use, as there’s only 178 litres of space behind the third row. With five people on board, there’s a healthy 607-litre boot – that’s 181 litres more than you get in the Mazda. There is also plenty of stowage for family clutter.

Up front you get a double-decker glovebox and deep door bins, while the hidden floor compartments are ideal for valuables. Another neat touch is the retractable load cover, which stores under the boot floor when not in use – a feature shared with the Renault.

And the similarities with the Scenic don’t end there. On the road, the Verso clearly hasn’t been developed with driving fun in mind. The over-assisted steering provides minimal feedback, and this lack of precision is shared with the other controls.

Nevertheless, the composed ride and good visibility make the Toyota easy to live with in town. Plus, the Verso scores on refinement, as its 145bhp 1.8-litre engine is a smooth performer – a good job, because to compensate for the torque deficit and keep up with traffic, it has to be worked hard. The Toyota disappointed in our in-gear acceleration tests. It sprinted from 30-50mph in fourth in 8.2 seconds – that’s 1.9 seconds behind the Scenic.

Still, what it lacks in pace the Toyota makes up for with efficiency. During its time with us, it returned 32.8mpg – that’s 4mpg better than the Renault. Yet while the Verso has clearly been improved, it isn’t a huge step forward – and we wonder if that will be costly in such a competitive market.

Chart position: 3WHY: The previous Verso was practical and functional. Has Toyota managed to bring a dose of style to the package?