Class-leading coupé serves up strong blend of style and quality. 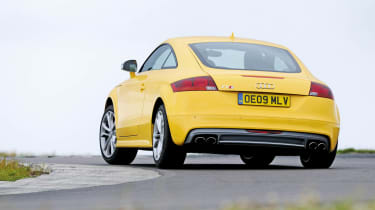 If the Nissan wants to net class honours, this is the car it has to beat. The Audi TT is an Auto Express favourite, and when it was crowned Best Coupé at our recent New Car Awards, it was for the third year in succession.

With its sleek looks, beautiful build and engaging driving dynamics, the Audi delivers a truly polished package. But this excellence comes at a cost. The TTS we test here is £33,425, while its 2.0-litre turbocharged engine delivers 268bhp – that’s 58bhp less than the cheaper 370Z.

It can’t match its Japanese rival for visual impact, either. The success of the Audi means its rakish shape is a familiar sight on UK roads, while the only clues to the performance potential of the S model are the quad exhaust pipes, brushed silver mirrors and an extremely subtle bodykit.

On the other hand, the eye-catchingly bright yellow finish of our test car is unique to the TTS, and is recommended for buyers who want to turn heads – even though you’ll have to pay another £490 for the extra attention of passers by. As you’d expect of an Audi, the TT plays its trump card when you climb inside. You’re confronted by a solidly built cabin that’s packed with quality materials. Neat details include a flat-bottomed steering wheel, chunky gearlever,  metal-ringed air vents and clear dials. And with multiple seat and steering adjustment, drivers will have little trouble getting comfortable. The TTS also has its rival beaten for practicality, thanks to a pair of rear chairs that will, just, accommodate adults for short journeys.

Better still, its deep boot will swallow 290 litres of luggage. Fold the rear bench, and capacity grows to a healthy 700 litres.

While the refined Audi doesn’t have the aural drama of the Nissan, it’s certainly not short of pace. With 350Nm of torque available from only 2,500rpm, the smooth-spinning turbocharged powerplant delivers blistering in-gear performance. At the test track, it sprinted from 30-50mph in third gear in only 2.6 seconds – that’s eight-tenths faster than the 370Z.

Standard Magnetic Ride adaptive damping and a grippy quattro four-wheel-drive system help the TTS serve up an excellent blend of ride and handling. The steering has decent feel, the gearshift has a slick, mechanical action and the brakes provide strong stopping power.

It’s not as boisterous as the Nissan, but on an unfamiliar back road the surefooted TTS is the quicker car. Its more compact dimensions combine with the all-weather traction of the 4WD to inspire confidence.

Only the price is likely to dampen your enthusiasm for the Audi. The standard car costs £33,425, which is a £3,225 premium over the Nissan. Start adding options such as sat-nav, electric seats and cruise control, and your wallet will take an even bigger hit.

Yet the TTS is still an extremely desirable machine. The 370Z will have its work cut out if wants to secure victory here.

WHY: The stylish TT is our reigning coupé champ. Can the rapid TTS version maintain the German car’s unbeaten record?